‘A regular occurrence but public statement is unusual’ 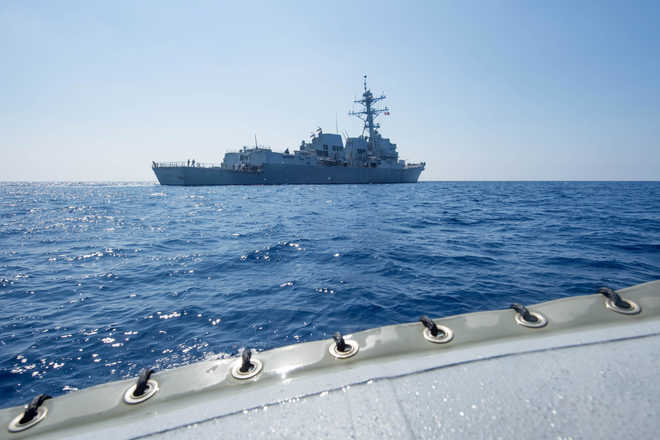 The sail past by a US Navy ship through the Indian exclusive economic zone (EEZ) has raised political temperatures but may not rock the bilateral diplomatic ties except for the matter of issuance of a public statement by the US Navy which has not happened in the past, said sources.

The US routinely challenges what it sees as “excessive maritime claims” of 22 countries. They include the entire South Asian littoral belt, including Bangladesh, Sri Lanka, Myanmar and Pakistan besides close ally Taiwan further in the east.

The statement by the US Navy has been unusually made public and there are several voices against its tone and tenor. But sources said the thrust of the latest statement is the same as the ones quietly served through diplomatic channels since the US Navy started carrying out these sails in Indian EEZ from 1992.

Initially the sails took place every second year. They became annual affairs in 1999. It didn’t take place in 2018 and the COVID-hit 2020.

Friend or foe, the US has adopted this practice of confronting “inconsistent claims” by 22 countries that it says are “excessive maritime claims”.

The US follows a two-pronged approach. Its Department of State diplomatically protests excessive maritime claims and asks the countries concerned to adhere to international law.

The Department of Defence then exercises the US’ maritime rights by conducting tangible, operational challenges against excessive maritime claims.

These FON (freedom of navigation) sails are deliberately planned in a manner that does not provoke armed conflict, said sources.

The differences between the US and the 22 countries are on a wide range of issues. But the entire rule book is thrown at China while India’s alleged misdemeanours merit a few lines.

The US conducts these FONs through the Indian EEZ to contradict New Delhi’s claim that prior consent is required for military exercises or manoeuvres in the EEZ.