US seizes on Modi's SCO remarks to claim India 'distancing' from Russia : The Tribune India 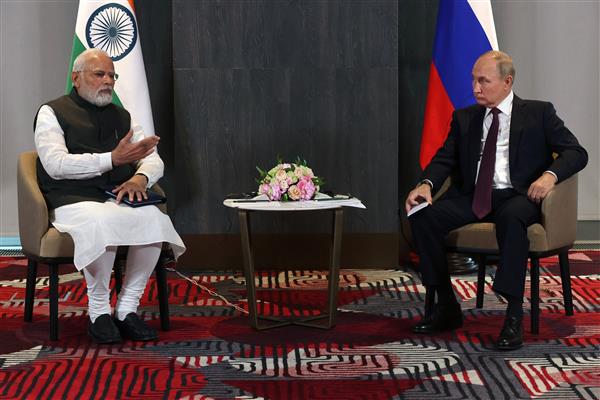 American leaders and the media seized on Prime Minister Narendra Modi’s opening remarks at a meeting with Russian President Vladmir Putin to claim that concerns expressed by India as well as China in an earlier meeting had increased the pressure on the Kremlin to end its aggression in Ukraine.

Under pressure to end aggression

We had Covid, climate change. Now, over 200 mn people are severely food insecure. This is what world leaders are feeling... it also increases pressure on Russia to end war. Antony Blinken, US Secy of State

Speaking at a press conference, US Secretary of State Antony Blinken said: “I think what you’re seeing is just a manifestation of the fact that this aggression has been an aggression against the interests of people across the planet.”

“We already had Covid, we already had climate change that were having profound effects on food insecurity. Add to that conflict, we now have well over 200 million people who are severely food insecure. This is something that leaders in countries around the world are feeling because their people are feeling it. And so, I think it increases the pressure on Russia to end the aggression,” said Blinken.

Blinken’s Deputy Wendy Sherman instead sought to drive a wedge between Beijing and Moscow by stating that their relationship is one “of convenience, not necessarily one of trust or one that will combine their efforts on all things” adding that it was “very interesting for Putin to say that”. In his opening remarks with Xi Jinping, Putin had acknowledged Beijing’s “questions and concerns”. CNN called PM Modi’s comments that “today’s era is not of war” as a “striking rebuke” and the New York Times’ story interpreted them as “India along with China distancing from Russia”.

“The implicit criticism of Putin underscored that he now faces perhaps his most challenging moment of recent months, suffering not just these diplomatic setbacks but also retreats on the battlefield and intensifying questions back home over how he has conducted the war,” it wrote.

Both China and India have provided vital outlets for Russian exports such as oil, gas, coal and fertilisers after the West banned their imports post the Ukraine conflict. Putin was quoted as assuring PM Modi: “I know your position regarding the conflict in Ukraine, your concerns which you continuously express. We will do everything for all of this to end as soon as possible.”