India’s biggest state prepares for its biggest test ahead of Assembly elections next year; comes in the middle of a ongoing farmers' protest 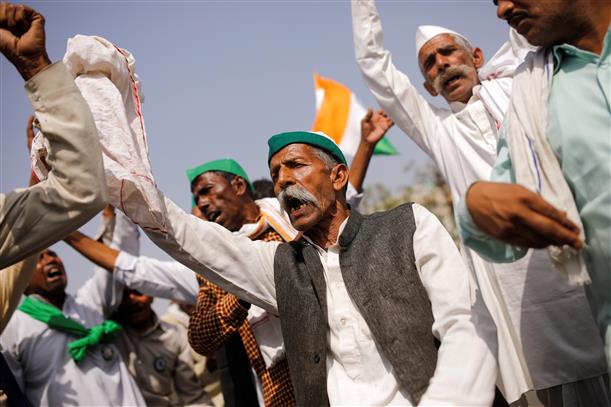 Farmers dance as they sing a folk song during a 12-hour strike, as part of protests against farm laws, on a highway at the Delhi-Uttar Pradesh border in Ghaziabad on Friday. Reuters photo

The Uttar Pradesh Election Commission announced on Friday the schedule for panchayat elections in the biggest state of the country.

Coming just a few months ahead of the Assembly elections next year, the panchayat elections are being seen as the biggest test of the Adityanath-led BJP government amid the ongoing farmers’ agitation, especially Jat-dominated regions of the western Uttar Pradesh.

The elections to the 403-member Uttar Pradesh Assembly are due around February-March, next year.

The polling for gram panchayats, kshetra’ panchayats and zila panchayats will be held in four phases on April 15, 19, 26, and 29. The results will be announced on May 2 along with results of Assembly elections in four states (West Bengal, Assam, Kerala, and Tamil Nadu) and UT Puducherry.

The western UP regions, especially those in the proximity of Haryana and the national capital, have been among the hot spots of ongoing farmers’ agitation against the three central farm laws.

Along with a permanent protest site led by BKU’s Rakesh Tikait at Ghazipur, the region has witnessed a series of ‘mahapanchayats’ supported by majority of opposition parties in UP, including the Samajwadi Party, the RLD, and the Congress.

The support to the agitation and the ‘mahapanchayats’ has come from rural communities across the board, including Muslims, and non-farm castes.  Political observer Sudhir Panwar says local bodies’ elections will reflect the mood of the people before the Assembly elections next year.

The State Election Commission has issued a detailed advisory amid the surge in COVID-19 cases, seeking strict adherence to the protocol while conducting the polls. It has also warned against spreading wrong and misleading information through social media, adding that strict action will be taken against the miscreants. The commission has directed the District Magistrates and police in the state to keep an eye on social media postings. The model code of conduct came into effect along with the announcement of polling dates.