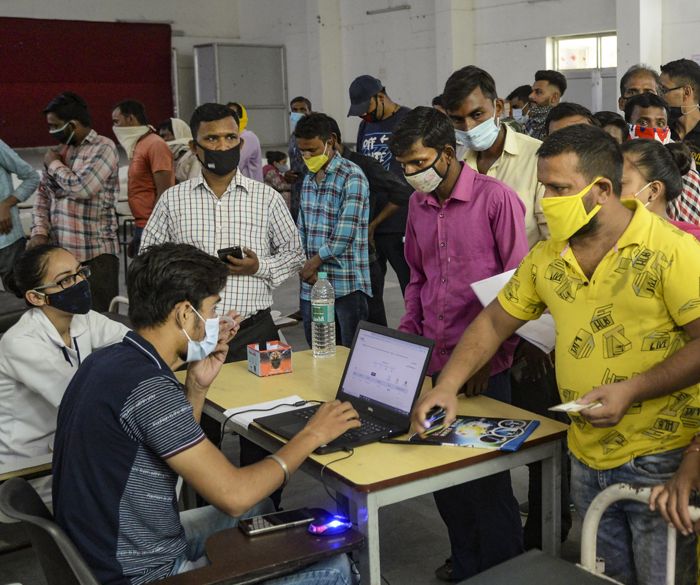 Beneficiaries register for vaccination at a hospital in Jalandhar. PTI

India will resume Covid-19 vaccine exports in the fourth quarter of 2021 starting October this year, Union Health Minister Mansukh Mandaviya announced on Monday, in a major policy shift from April this year when exports were banned to meet domestic requirements.

Over 60% vaccinated with one dose, 20% covered with both

Citing massive ramp-up on the vaccine production front with 30 crore doses expected in October, Mandaviya said ‘Vaccine Maitri’ would be resumed starting October and only excess doses would be exported.

On the expected production in the coming months, the Minister said more than 30 crore doses would be produced in October and more than 100 crore were expected in the last three months of the year as Biological E too would begin its production.

The Minister said not only would India “help other countries with Covid vaccines starting the last quarter this year, it would also fulfil the commitment towards COVAX, the global vaccine initiative, in line with the motto of Vasudhaiva Kutumbakam”. COVAX is co-led by Gavi, the Coalition for Epidemic Preparedness Innovations (CEPI) and the World Health Organisation.

“We will receive 30 crore vaccines and may be more in October once Biological E begins production and the surplus supply of vaccines will be used to fulfil our commitment towards the world for the collective fight against Covid-19,” said the Minister.

“India’s vaccination drive has been a role model for the entire world and it is marching ahead with great speed,” the minister said.

New Delhi: Congress leader Shashi Tharoor on Monday declined an invitation from the Cambridge Union debating society over what he described as “racist” Covid-related travel regulations in the UK. He also pulled out from events to launch the UK edition of his book, “The Battle of Belonging”. Former minister Jairam Ramesh also slammed the UK travel rules under which Indians vaccinated with Covishield would still be treated as unvaccinated. TNS

US to ease curbs for visitors from Nov

Washington: The US on Monday announced a new international travel system under which fully vaccinated individuals would be allowed to enter the country from November. This essentially also lifts the travel ban on countries like India that former President Donald Trump had imposed in 2020. PTI