RS Chairman said that in a criminal matter, the MPs are not on a different footing than a common citizen 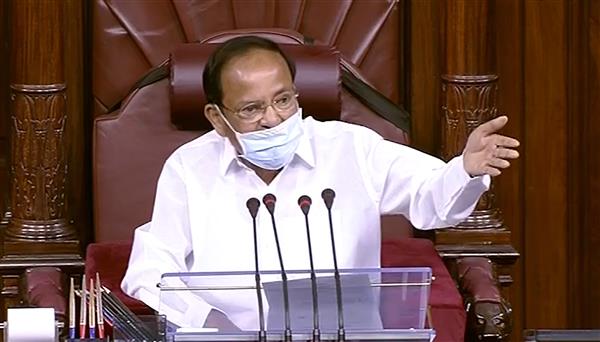 Rajya Sabha Chairman Venkaiah Naidu on Friday said there was a wrong notion among the MPs that they were having privilege from action by agencies when the parliament was in session.

While privileges give a member protection from civil laws during session, it does not make them impervious to criminal proceedings, Naidu said.

ED notice received by Leader of Opposition in the Rajya Sabha Mallikarjun Khaerge asking him to appear before the agency at 12-30 in the afternoon on Thursday (when the parliament was meeting) triggered off a massive furor.

“I have given it a serious thought and examined all the precedents. I remembered my own ruling also”, Naidu said while addressing the Upper House during the Zero Hour today.

The Chairman said he had consulted the relevant portion of the Constitution also. He said there were certain privileges that a member of parliament enjoyed so that they can perform their parliamentary duties without any direct or indirect threat.

“One of the privilege is that a member of parliament cannot be arrested in a civil case forty days before the commencement of the session or committee meeting or forty days thereafter”, Naidu said.

This privilege is already incorporated under 135A of the civil procedure 1909. However, in criminal matter, the MPs are not on a different footing than a common citizen, the Chairman said.

“That means an MP does not enjoy any immunity from being arrested in a criminal case during the session or otherwise. There have been a number of rulings by presiding officers,” Naidu said.

The Chairman said that Zakir Husain, in a ruling given in 1966, observed that MPs do enjoy certain privileges so that they can perform their duties. One such privilege is freedom from arrest when parliament is in session. But, the privilege is limited only to civil cases.

“Members may also recall that I had made an observation earlier. I said that no member of the House should avoid appearing before an investigating agency if he or she is called upon to do so by citing reasons of parliamentary duty when the law makes it our bounding duty to respect the law,” Naidu said.

Naidu added that K Anandam Nandihar of the Supreme Court had held that the true constitutional provision was that so far as valid order of detention was concerned no member of parliament can claim special status higher than that of an ordinary citizen and are liable to be arrested, detained and questioned “even during  session”.

The Supreme Court in a recent case (State of Kerala vs K Ajeet) stated that privileges and immunities were not gateways to claim exemption from the general law of the land, particularly the criminal law which governs the action of every citizen, Naidu said.