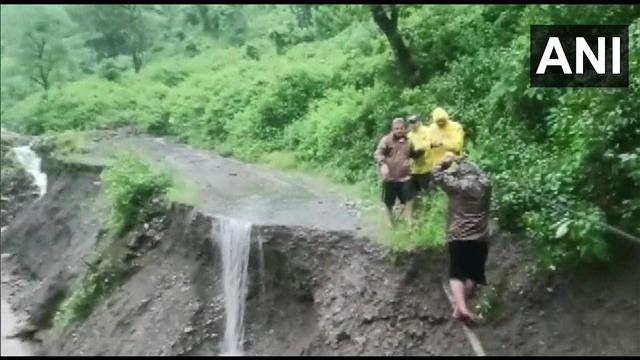 A cloudburst occurred in Raipur block in Dehradun district of Uttarakhand in the early hours of Saturday.

The cloudburst was reported by locals at 2.45 am on Saturday in Sarkhet village in Raipur block. State Disaster Response Force (SDRF) team rushed to the spot after getting information.

"All the people stuck in the village were rescued while some took shelter in a resort nearby," said SDRF.

"Due to the continuous torrential rains since yesterday, the Tamasa river flowing near the famous Tapkeshwar Mahadev temple in Dehradun has taken a formidable form. Due to which the contact of Mata Vaishno Devi Cave Yoga Temple and Tapkeshwar Mahadev has been lost, the pool has also been damaged. By the grace of God, there has been no loss of life or property," said Acharya Bipin Joshi, the founder of the temple.

In view of the heavy rains and flash floods, the upward movement of devotees in Mata Vaishno Devi temple was stopped for some time.

"In the wake of heavy rainfall, upward movement of pilgrims to Vaishno Devi temple has been stopped from Katra. Priority is given to pilgrims coming downwards. Police and Central Reserve Police Force (CRPF) have already been deployed. The situation is being monitored. No untoward incident reported so far," said Shri Mata Vaishno Devi Shrine Board.

However, the movement to the shrine has been resumed now.

Earlier in July, a cloudburst struck the holy cave area of Amarnath which resulted in a heavy discharge of water in the 'Nallah', adjoining the holy cave, following which the route to Amarnath was damaged, it the yatra was on halt for some time.

Four Mi-17V5 and four Cheetal helicopters of the Indian Air Force were also deployed for rescue and relief efforts at the Amarnath shrine.

The Yatra began on June 29, from Jammu amid tight security arrangements made by the Central Reserve Police Force (CRPF) along with the army and the local police.

The Amarnath shrine pilgrimage to the 3,880-metre-high cave shrine of Lord Shiva, located in the upper reaches of the Himalayas, is held from the twin routes of Pahalgam and Baltal.