Video: In another dog attack, Pitbull bites cow in Kanpur : The Tribune India

Video: In another dog attack, Pitbull bites cow in Kanpur 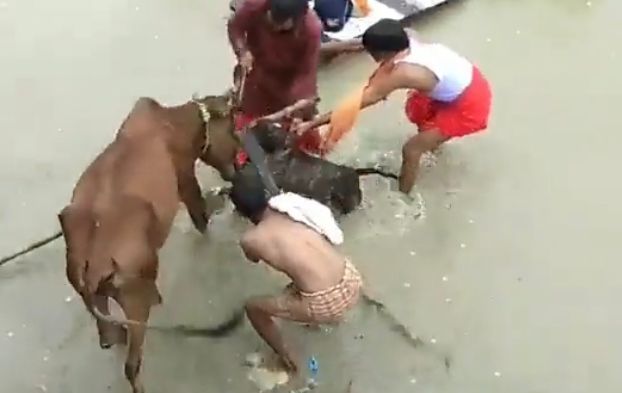 A Pitbull dog has now attacked a cow in Uttar Pradesh's Kanpur following which the municipal authorities have asked the dog owner to show the dog's licence.

A viral video on the social media shows a dog attacking a cow in Sarsaiah Ghat area here.

After a long struggle, the cow freed from the captivity of Pitbull. #Dog #Kanpur #Cow #ViralVideo pic.twitter.com/fGn7KkVQ9C

The ferocious dog is seen clinging to the cow's jaw.

The owner of the cow rescued the animal after repeatedly hitting the Pitbull with a stick.

Later, as the video went viral, the municipal authorities seized the dog and put it in a cage while the cow that suffered a serious injury in the jaw, was sent to a veterinary hospital.

The Pitbull owner Goldie Mishra has been asked to show the dog's licence.

Incidentally, the Pitbull had attacked another person in the same locality a week ago.

It may be recalled that nearly half a dozen persons have been attacked by Pitbull dogs in different incidents over the past two months. An elderly lady succumbed to injuries in Lucknow in July.