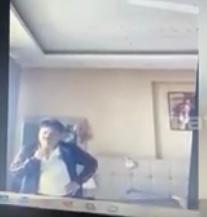 A still from video posted on YouTube by Mathrubhumi News

The decorum of the virtual courtroom hearing has been broken many times as people continue to carry out their personal everyday activities during the proceedings.

In yet another incident at the Kerala High Court, a person was seen either brushing his teeth and shaving, during the proceedings before Justice VG Arun on January 17.

Following the surge in Covid cases, the Kerala High Court had decided to conduct virtual hearings from that day. And what came after, a man entered the session was seen brushing his teeth and shaving facing the camera.

While it appeared that the judge did not notice the incident, a video of the same was shared across social media.

The man, in the video, appears to have just woken up and is seen walking back and forth in a room that appears to be a washroom. It appeared that he was either shaving his beard or brushing his teeth during the proceedings, and was seen doing so by other attendees.

A similar incident was reported in November, when a shirtless man was spotted in Justice Devan Ramachandran's bench. The court had then remarked: “Who is this? What is going on? I don't have a problem with anyone listening to the proceedings, but at least adhere to the decorum. I can see a shirtless man here. This is a court, not a circus or a cinema."