Video: Stampede during ticket sale of India-Australia match in Hyderabad, police resort to lathicharge to control crowd : The Tribune India 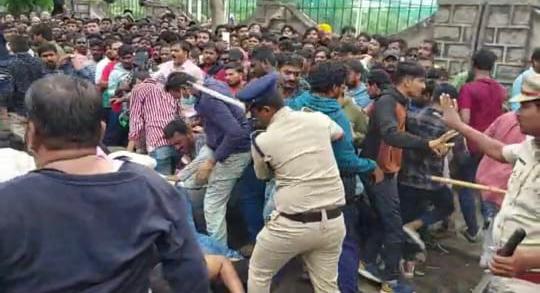 There was a stampede during ticket sale for the third India-Australia T20 match in Hyderabad on Thursday morning in which four people were injured.

The match between India and Australia is to be held in Hyderabad on September 25 and the ticket sale was to start on Thursday.

Excited fans started reaching outside the stadium since Wednesday night to buy tickets. A video shows some of them sitting in a line and others gathered near the gate.

As the crowd swelled and got out of control, the police reportedly lathicharged the people.

The injured people, including two women, were hospitalised and were fine, police said.

Police said they faced a tough time in managing the situation.

About 15,000 people gathered at the ground and some of them said they arrived there early today.

Some of them alleged that tickets were sold in black.

Telangana Sports Minister V Srinivas Goud on Wednesday said tough action would be taken against those selling tickets in black.

Media reports said the rush for tickets is because Hyderabad is hosting an international match after over two years. —with PTI inputs