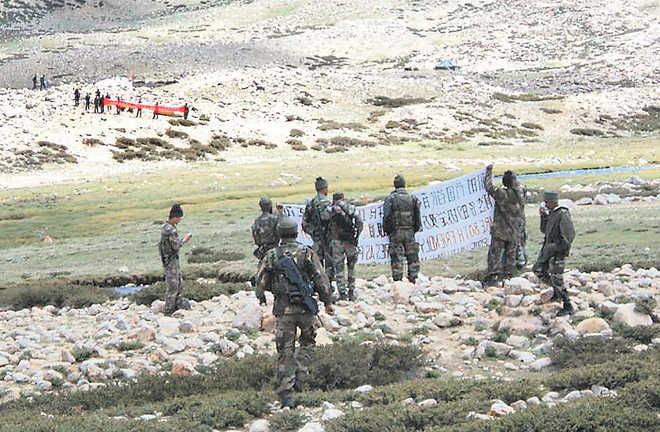 After the skirmishes between troops of India and China along the Line of Actual Control (LAC) in eastern Ladakh, the ‘war’ now is on Twitter where a video and picture of each other’s troops being beaten up threatens to make the ongoing negotiations tough for either side.

The new kind of ‘war’ emerged this morning with videos showing uniformed personnel, clearly Indian troops, along the bank of a lake attacking a Chinese military armoured vehicle. A soldier (possibly a Chinese trooper) is seen lying on the ground, injured. An Indian uniformed man is seen trying to kick him. Another man in uniform and a bullet-proof jacket protects the injured man.

These videos, first circulating on WhatsApp, were later tweeted by India-based handles, chiding not just China but also its ally Pakistan. An Indian Army spokesperson said the contents of the video were not authenticated. “Attempts to link it to the situation in Ladakh are mala fide. No violence is happening,” he said.

The Army has requested the media not to air the visuals that are “likely to vitiate the current situation on the borders”.

A senior functionary admitted that the videos could make it tough for the negotiators on either side.

It did not stop Chinese Twitter handles, known to tweet for the People’s Liberation Army (PLA) of China, from tweeting an image of badly beaten up and bleeding soldiers, who looked from the Indian Army. Some of them were lying on the ground while others seemed unconscious. Their hands and legs were bound with ropes. A blue boat visible in the picture suggested the location was Pangong Tso.

This set off another reaction, this time from Pakistani Twitter handles, who supported the Chinese troops and chided the Indian Army. Another PLA handle @dafengcao justified the images saying “there seems to be some kind of consensus on both sides before, however, the Indian broke it first after releasing the footage”. Adding to the twist was a parody account of the PLA which was on tangent of its own.

Attempts to conduct talks notwithstanding, troops strength and military posturing along the LAC is like before. Tanks, artillery and equipment besides air assets are lined up on either side, said sources. The Army has been told to hold ground. On Sunday, Defence Minister Rajnath Singh said the existing mechanism to resolve such issues has been set in motion.

Chinese have unilaterally stopped Indian troops from patrolling in crucial areas between ‘finger-2’ and ‘finger-4’ along the north bank of the Pangong Tso (a 135 km glacial melt lake). The Chinese have also intruded along the confluence of Shyok river and Galwan river in sub sector north (SSN) close to the 255 km Darbuk-Shyok-Daulat Baig Oldie (DSDBO) road.