Viral photos: 3 cobras ‘blessing you at a time’, Internet can’t keep calm over the 'divine thing' 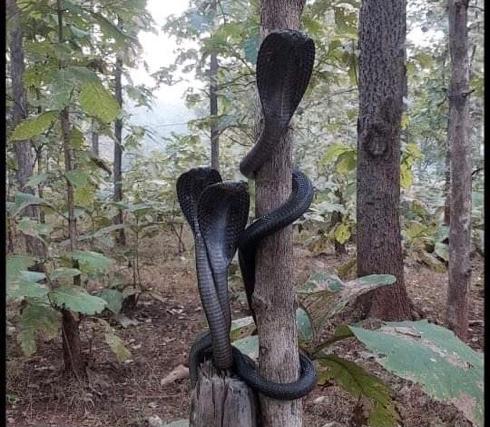 In India, we associated snakes with mythology and if we talk of black cobras, it does get a spiritual tinge. A photo of three black cobras in Maharashtra has gone viral on social media.

They were reportedly clicked after the snakes were rescued and released into the forest. A user named Rajendra Semalkar posted a series of photos, which show three cobras were coiled around a tree in Harisal forest in Amravati district.

Blessings...
When three cobras bless you at the same time.
🎬:Rajendra Semalkar. pic.twitter.com/EZCQTumTwT

Only a Hindu would look at a cobra and think about getting blessings, everyone else would sensibly run in the opposite direction! 😁

Ya because our mythology has lot of references to it.

Wow! They are simply beautiful yet intense and fierce, almost divine!

Blessings...
When three cobras bless you at the same time.
🎬:Rajendra Semalkar. pic.twitter.com/EZCQTumTwT