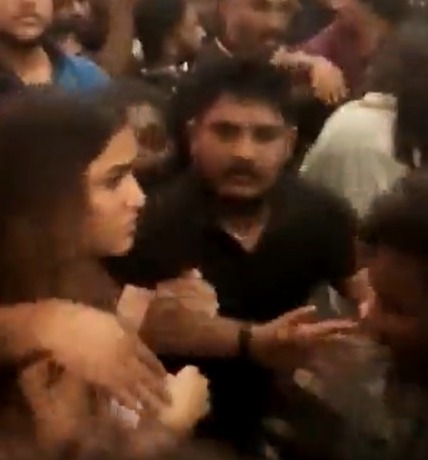 In a shocking revelation made through an Instagram post, a popular Malayalam actor has said she experienced sexual misconduct during a film promotion event at a mall in this north Kerala district.

The state women’s panel strongly condemned the incident and police launched an immediate probe into the matter.

Expressing her anguish and concern over the “sexual frustration” of people, she said another woman actor also had a similar experience during the event held late on Tuesday night at the busy mall.

A purported video of the incident went viral on social media platforms soon which were also aired by local TV channels.

Again it's proved that HiLite mall is not a best place for movie promotion! pic.twitter.com/ko3UvojhVh

“Kozhikode is a place I loved a lot. But, tonight while returning after a programme, a person from the crowd grabbed me. It disgusts me to say where! Are people around us so frustrated? We had been to several places as part of the promotion. But, I never had such a pathetic experience anywhere else. My colleague also had a similar experience. She reacted...but I couldn’t in that situation as I was dumbstruck for a moment..,” the actor said in the social media post.

The other actress, who had been subjected to misbehaviour from the crowd, also shared the harrowing experience through her Instagram page.

She said the mall was overcrowded and security personnel were struggling to manage the rush. A person had misbehaved with one of her co-stars but she could not react.

“Later, I also encountered a similar experience but I reacted... I wish that no one has to face this kind of unwanted trauma in their life...,” she said and wanted the guilty to be punished.

As the actors’ social media posts triggered a row, the Kerala State Women’s Commission chief P Sathidevi condemned the incident and urged the police to intervene into the matter and nab the culprits at the earliest.

Incidents of women being attacked in the midst of crowd are happening continuously and the society should see the instances with utmost caution, she said.

A senior police official told PTI the statement of one of the victims was recorded and that of the other person, who is in Kochi now, would be recorded soon. A woman constable was already deployed for the same.

“Based on the statements, FIR will be launched and the IPC sections can be known only after that. A producer has sent a complaint via email but it was a bit vague. So, we decided to record the victims’ statements at the earliest to make the case stronger,” he said.

Efforts to identify and trace the culprits based on the CCTV visuals were also on, sources added.

A promotion event held at the same mall a month ago had to be cut short as the crowd assembled there to witness their favourite actor went out of control.