Watch: Jharkhand MLA sits in pool of muddy water, pours it over herself to protest against 'poor' condition of road : The Tribune India

Watch: Jharkhand MLA sits in pool of muddy water, pours it over herself to protest against 'poor' condition of road 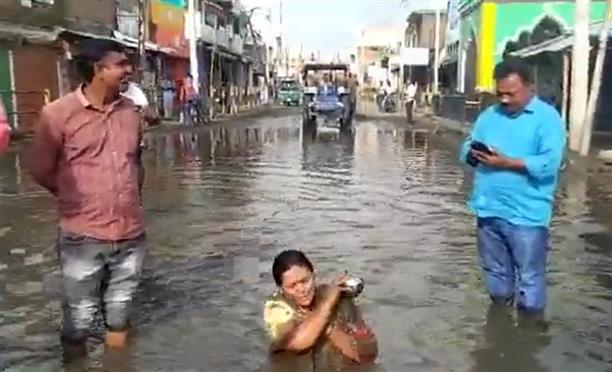 A Jharkhand Congress MLA on Wednesday grabbed eyeballs by sitting in a pool of muddy water on a stretch of a national highway in Godda district, protesting against its "poor condition" and demanding immediate repair work of the road.

Dipika Pandey Singh, the legislator from Mahagama, also poured muddy water all over her, and vowed that she would not budge unless repair efforts are undertaken to fill up the "large potholes".

"I don't want to get involved in the fight between the state government and the Centre... This is NH-133 and authorities had taken the responsibility to widen this stretch in May 2022, but the Centre does not provide funds for repair of this highway... Under the given circumstances, I would request the chief minister to get it done as people are facing hardships," she said.

Singh claimed she had been demanding that repair be undertaken of the stretch of the highway for long, but assembly committee officials did not visit the spot.

She also criticised Godda MP Nishikant Dubey in a tweet, contending that "public representatives can understand the plight of people if they come and sit here".

In response, Dubey took to Twitter and said: "The Congress MLA from Mahagama is sitting on a dharna against Chief Minister Hemant Soren... This highway is maintained by the Road Construction Department and the Centre has already allocated Rs 75 crore six months back for it."

Singh, however, alleged that the central government has not provided any funds for its repair work.

"It's a blatant lie what Dubey is saying; the Centre has not allocated any money," she told PTI.

Officials of the National Highways Authority of India (NHAI) and the Road Construction Department could not be reached for comments.