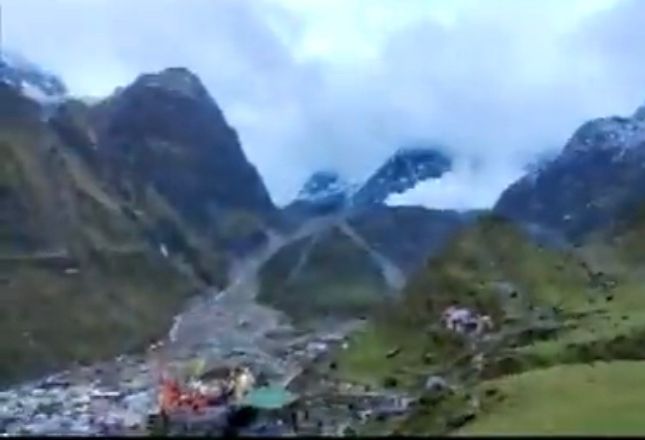 An avalanche occurred behind the Kedarnath Dham in the Himalayan region of Uttarakhand on Saturday but no damage was caused to the temple, the Badrinath-Kedarnath Temple Committee President informed.

"An avalanche occurred this morning in the Himalayan region but no damage was sustained to the Kedarnath temple," Ajendra Ajay, President, Shri Badrinath-Kedarnath Temple Committee told ANI.

#WATCH | Uttarakhand: An avalanche occurred this morning in the Himalayan region but no damage was sustained to the Kedarnath temple: Shri Badrinath-Kedarnath Temple Committee President, Ajendra Ajay pic.twitter.com/fyi2WofTqZ

As per the information, the giant glacier behind the Kedarnath was broken for the second time since the last month and appeared like a watershed from distance.

Details regarding the status of Yatra are currently awaited.

Earlier, the avalanche had occurred in the catchment of Chorabari Glacier at Kedarnath Dham on the evening of September 22.

Chorabari Glacier is situated at a distance of about 5 km behind Kedarnath temple. It is raining heavily in the state for the last few days.

National Highway (NH)- 109 at Rudraprayag was blocked on Thursday, with long queues of vehicles after a sudden landslide led to the roll down of debris from the hill near Tarsali village in Rudraprayag.

The blockage of the NH lead to long queues of vehicles being formed on both sides of the road.

Notably, Prime Minister Narendra Modi on September 22 reviewed the ongoing reconstruction works in Badrinath and Kedarnath through virtual medium and inquired about the progress of the reconstruction works of the temples. The meeting was virtually attended by Chief Minister Pushkar Singh Dhami from the Secretariat.

The terrifying avalanche brought back the memories of the disaster in 2013.

On 16 June 2013, Uttarakhand suffered its worst disaster in the living memory resulting in huge loss to lives and wide spread destruction of infrastructure across the state.