Water should be an issue of cooperation, coordination between states, PM Modi says a day after SYL stalemate between Punjab, Haryana : The Tribune India

Water should be an issue of cooperation, coordination between states, PM Modi says a day after SYL stalemate between Punjab, Haryana 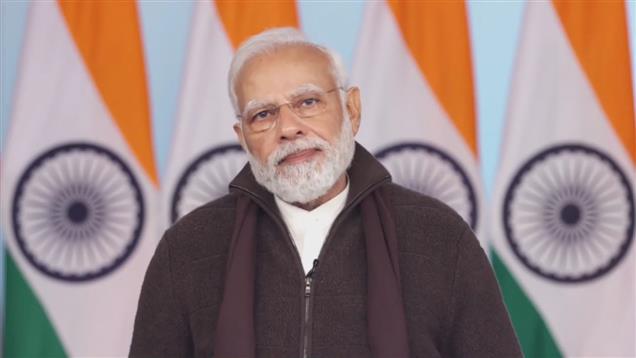 A video grab of PM Narendra Modi addressing the conference.

A day after Punjab and Haryana failed to reach an agreement on the construction of the Sutlej Yamuna Link canal, Prime Minister Narendra Modi on Thursday said water should be an issue of cooperation and coordination between the states.

Addressing the first national conference of state water ministers convened by the Centre to discuss and prepare for the looming water crisis, the prime minister urged governments to ensure people’s participation in the water conservation movement along the lines of Swachh Bharat campaign.

“Public ownership of a campaign is the true sign of its success…it raises people’s consciousness and appreciation about the scale of the effort, the monies involved, the nuances at hand,” said the prime minister, asking states to innovate better for water use efficiency and rainwater-harvesting.

He said 70 lakh hectares of land in the country had been brought under micro irrigation saving large quantum of water, adding, ‘Per drop more crop’ programme is also gaining momentum.

The PM said although rainwater harvest campaign had created the much-needed buzz “a lot remained to be done to intensify if for desired outcomes”.

The PM also urged gram panchayats to prepare an action plan for the next five years where a roadmap ranging from water supply to cleanliness and waste management should be considered.

He said panchayats should take the leadership of Jal Jeevan Mission which aims to provide clean tap drinking water to all rural households.

The two-day Water Vision 2047 conference being held in Bhopal from Thursday is the brainchild of Jal Shakti Minister Gajendra Singh Shekhawat, who said India must prepare ahead for the estimated water stress situation by 2047.

"Water requirements assessed by 2047 will exceed the total quantum of water available with us. The harvestable component of water as of date is somewhere around 1,180 billion cubic metres (bcm) and our requirement is 880 bcm. But by 2047 the demand is going to surpass the total harvestable component. So it is going to be critical for which we must prepare ahead," Shekhawat told The Tribune.

The minister said the two-day national conference (Water Vision 2047) is seeing the participation of all states.

He said 50 years ago, the average annual per capita availability of water was around 5,000 cubic metre but this has reduced on account of population growing 3.5 times since then. "Per capita water availability by 2047 would be somewhere around 1,300 cubic metre," Shekhawat said, adding that the conference would have every state present its vision and solutions to deal with the potential water stress situation we are estimating in the future.

The minister said the estimated water availability in 2047 would not be even.

"Given geo-spatial variations and geographical locations, some states will be water scarce and others will be water abundant. Solutions must be worked out in advance to deal with the challenge," he said.

Shekhawat said major solutions centred on water use efficiency in agriculture; recycling and reuse of sewage; ground water recharge activities; rainwater harvesting; and inculcation of water sensitivity in the minds of the people.

The conference comes amid ongoing water disputes between states, including the decades-old SYL dispute, where the Centre’s efforts to broker peace between Punjab and Haryana have failed.

The meeting of Punjab CM Bhagwant Mann and his Haryana counterpart ML Khattar called by Shekhawat to find an amicable solution proved inconclusive on Wednesday with Punjab saying it can’t build the canal as it has no water to spare.

The matter will be reported to the Supreme Court which has asked the Centre to find a mediated settlement between the two states.

The next date of hearing in the SYL case is January 19.