We asked Congress to target terror, they aimed at Modi: PM in Gujarat : The Tribune India 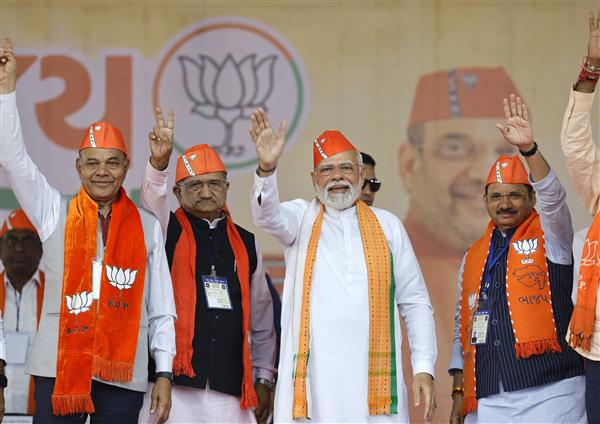 Prime Minister Narendra Modi with other BJP leaders waves at supporters at a public meeting ahead of the Gujarat Assembly elections, in Kheda district, on Sunday, November 27, 2022. PTI

Prime Minister Narendra Modi in Sunday launched his sharpest offensive so far on rival Congress in poll-bound Gujarat saying the erstwhile UPA government at the Centre “would let off terrorists while the BJP government in Gujarat would invest energies in nabbing them”.

Accusing the Congress and newer parties (read AAP) of practising politics of appeasement and viewing terrorism from the prism of vote banks, the Prime Minister said, “The ideology of terror has not vanished. Dangers of terrorism will last as long as vote bank politics lasts. The country and Gujarat need to be very cautious of parties practising vote bank politics...parties that fall silent even at the height of terror attacks and raise questions in surgical strike,” said the PM at a poll rally in the state today.

The PM recalled the 14-year-old Mumbai terror attack and said Gujarat also remained a target of terrorism for long.

Mentioning the recent Ahmedabad court verdict sentencing 38 to death for serial blasts in the city in 2008, the PM said, “Gujarat wanted to end the game of terror. The BJP government in Gujarat dealt strongly with terror spawning sleeper cells. Here in Gujarat we would nab terrorists and act against them but no one can forget how the Congress government in Delhi invested its entire energies in letting off terrorists.”

The PM said the BJP government at the time “kept telling the Congress in the Centre to target terror”.

“But they kept targeting Modi and the result was terror attacks in all major Indian cities.”

The PM said “the Congress and other power hungry parties that want short cuts in politics view terrorism from the prism of vote bank and appeasement”.

“Gujarat and the country must remain very cautious of these parties,” PM Modi said adding that such parties do not condemn terror attacks and their sympathisers “defended terror accused.”

“These parties are worried about displeasing a section of people, and about any potential harm to their vote banks... Not just are they silent when terror attacks happen, their sympathisers defend terror accused when matters go to courts,” PM said, adding that people’s 2014 general election mandate “helped BJP crush terrorism which was no longer an issue in cities”.

“Leave alone cities, handlers of terrorists have now been forced to think hundred times over even to plan attacks on our borders. India now attacks terrorists in their backyards,” said the PM attacking Congress and AAP for raising questions on surgical strike and the capacity of Indian Armed Forces.

“Terrorist ideology has not vanished. Congress politics has also not changed. Newer parties are also entrapped by vote bank politics. So dangers of terrorism are alive till vote bank politics is alive,” said PM adding that only BJP’s double engine governments can protect Gujarat and India from terror attacks.

Noting that youngsters of Gujarat had not even seen a curfew, PM noted, “I have to protect my youngsters from bombings.”

As he asked “who can avert bombings”, the crowd was heard answering “BJP”.