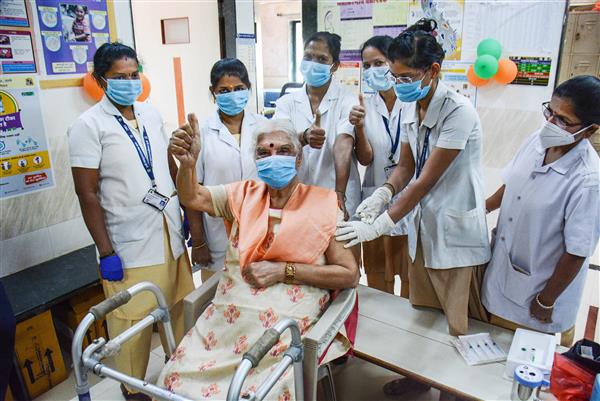 An elderly woman shows thumbs up after she got vaccinated with COVID-19 vaccine, at a vaccination center in Thane, on Tuesday, March 2, 2021. PTI

Wedding and poll season have prima facie led to the recent surge in COVID 19 cases across India with the high-burden states sharing this input in review meetings with the Centre.

The government today said more than one state which has reported marginal rise in daily new infections in the past two weeks have said the season of weddings and ongoing election campaign rush has led to the surge.

“The surge has not been caused by any new variant of the COVID virus but states have attributed the rise in new cases to weddings and polling. Central teams are in high burden states to investigate deeper,” Member, Health, NITI Aayog VK Paul said today.

Meanwhile, 50 lakh online registrations have happened on CoWIN portal for phase 2 vaccination covering 60 plus and 45 to 59 year old people with notified conditions.

Read also: People want to forget March 1, 2020 but it is seared into my memory: Delhi’s 1st COVID-19 patient

RS Sharma, chairman of the government empowered group on COVID vaccination said there had been 50 lakh registrations reflecting one crore beneficiaries since one mobile number could be used to register four people.

Sharma acknowledged system glitches yesterday but said these happened because people started looking for a CoWIN app which they found. “But this app is not meant for vaccinations. The registrations are happening on Arogya Setu app and on CoWIN portal (cowin.gov.in). Today there have been no problems. We are also collecting meta data on the time taken for a registration request to be fully processed,” said Sharma.

The government further clarified that private hospitals can schedule vaccinations whenever they want.

“We have done away with the 9 am to 5 pm schedule. Private hospitals can schedule vaccine sessions when they want depending on their capacities,” Union health secretary Rajesh BHushan said.

The government also acknowledged a threat of cyber attacks to citizen data but added that watchfulness was being maintained.

“We want data to be safe. There are possibilities of cyber attacks. We are watching that. We are conscious of data safety challenges and are not collecting any sensitive data. Only basic demographic data has been taken,” RS Sharma said.

He termed the scalability of CoWIN as a matter of concern.

“We are aiming to vaccinate one sixth of humanity. Naturally scalability is an issue. Right now around 27,000 hospitals are being used to deliver vaccines. More will be added. The CoWIN portal is very simple and flexible and we will be able to scale it up,” Sharma said.

“Overall case positivity is down to 5.1 pc which means we are very near to WHO threshold of declaring the disease in control. Maharashtra and Kerala account for over 70 pc of all COVID cases. Although certain states are seeing a surge in active cases the fact remains that recovered cases continue to be more than 97 pc and active cases continue to be less than 2 pc. States have been told to intensify precautions,” Bhushan said.

He said Punjab has seen a consistent rise over the past two weeks.