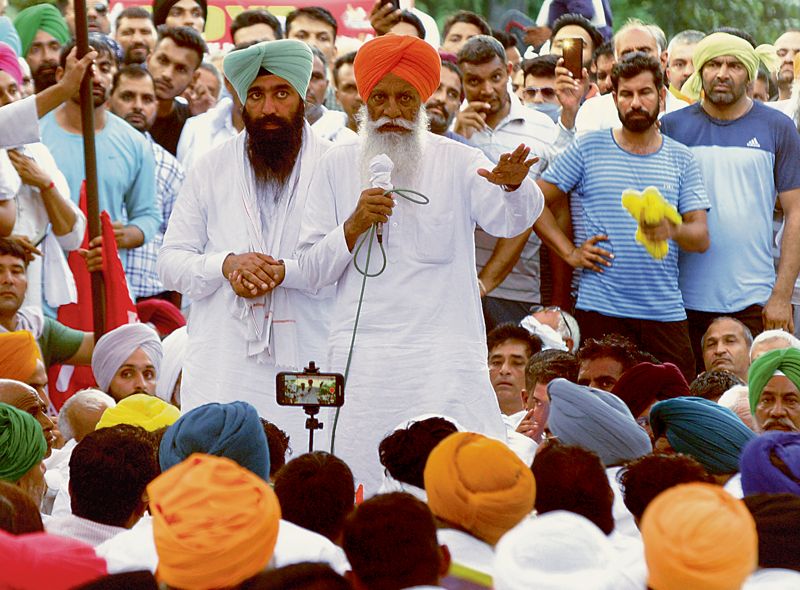 Even as the Centre today hiked the MSP for wheat by Rs 40 (2 per cent) to Rs 2,015 per quintal, another round of talks between the Karnal administration and protesting farmers ended in a deadlock, with the latter refusing to budge from their demands. The farmers, led by the Samyukt Kisan Morcha (SKM), laid siege to the district headquarters yesterday in protest against police lathicharge on protesters here last month. An 11-member SKM delegation, including Rakesh Tikait, Gurnam Singh Charuni and Yogendra Yadav, met administrative officials, led by Karnal Divisional Commissioner Sanjeev Verma. In the meeting that lasted for over three hours, the leaders remained firm on their demands, including the suspension of IAS officer Ayush Sinha for his briefing to cops on August 28 where he told them to “crack their (farmers’) heads”. Yadav said, “We are demanding Sinha’s suspension and an FIR under Sections 302 and 307 of the IPC against him, but the government is not ready to act against him.”

Tikait said, “Like Singhu and Tikri, we will continue our dharna here. More supporters from Punjab, Haryana and UP will join our cause.”

DC Nishant Kumar Yadav said, “We offered the farmers a thorough probe into the Bastara toll plaza incident, but they remained adamant on action against officers. We have urged them to clear the road so that the work at mini secretariat is not affected. We are trying to resolve the issue in a peaceful manner.”

New Delhi: RSS-affiliated Bharatiya Kisan Sangh held a protest at Jantar Mantar as part of its stir to demand the government brings a law to ensure remunerative prices for farm produce. TNS