While NIA zeroes on Vaze, 'trouble' in Maharashtra's Aghadi government

The BJP, which has been gunning for the Shiv Sena-led government, is now demanding the resignation of Thackeray 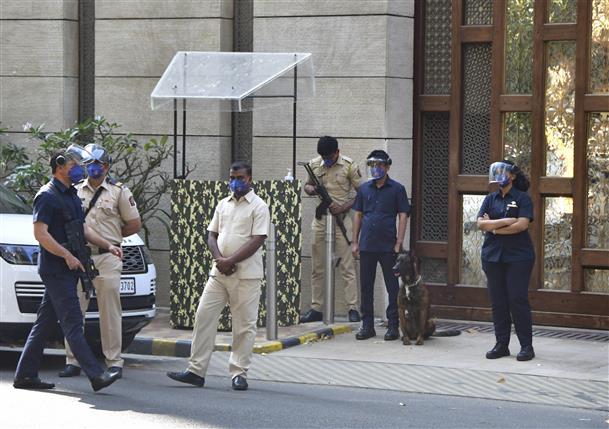 Police personnel guard outside industrialist Mukesh Ambani’s residence Antilla, a day after explosives were found in an abandoned car in its vicinity in Mumbai on February 26, 2021. — PTI

The sources revealed several meetings have been held by allies—the Shiv Sena, the NCP and the Congress—to discuss the issue related to Vaze which has become murkier after the National Investigation Agency on Tuesday seized a Mercedes car, which it claims belongs to the suspended Mumbai Police officer.

The car contained the original number plate of the explosives-laden Scorpio found abandoned outside industrialist Mukesh Ambani’s residence, Rs 5,75,000 in cash, a note counting machine, a set of clothes and kerosene concealed in its boot, it was claimed.

The BJP, which has been gunning for the Shiv Sena-led government, is now demanding the resignation of Thackeray.

Leading the attack, former Maharashtra CM Devendra Fadnavis who has called this “just the start of the probe”, is suspecting more.

“Much more will come out in the days to come,” he said, slamming the Shiv Sena for “supporting Vaze” and accusing Thackeray and Home Minister Anil Deshmukh of “protecting him like his lawyers”.

Not just this, BJP leader Kirit Somaiya also alleged that Vaze had six businesses and two Shiv Sena leaders were his business partners while another party leader, Nitesh Rane, accused him and “a cousin of Aaditya Thackeray of running an IPL extortion racket”.

Sena insiders claim Vaze, who is said to have carried out “63 encounters in his career”, was never an active member of the party.

He was suspended from the police force in 2004 in connection with the murder and destruction of evidence in the case related to the custodial death of Khwaja Yunus, a bomb blast accused arrested in 2002.

Though Vaze made several attempts to get reinstated before he resigned and joined Sena in 2008, he was reinstated last year “due to staff shortage amid the COVID-19 pandemic”.

The BJP is accusing Thackeray of “inaction” against his “favourite officer whom he reinstated after 16 years and handed over the high-profile cases”.

The Shiv Sena, which said the Maharashtra Police is quite capable of solving the case and that the state government had handed the case to the Anti-Terrorism Squad, claims that even while the investigation was on the Centre moved the NIA.

It has termed the arrest of Vaze, an accused in the death of automobile parts dealer Mansukh Hiren, by the NIA an “insult” of the Maharashtra Police. According to NIA, Vaze had been arrested for his “role and involvement in placing an explosives-laden vehicle near Carmichael Road on February 25".

Currently suspended, speculations are flying around about what he has “told/spilt” to the NIA.

NCP chief Sharad Pawar met CM Uddhav Thackeray while state NCP president Jayant Patil dismissed speculations regarding the resignation of Home Minister Anil Deshmukh amid reports of some Sena leaders saying that the police department was under his control.