Why barges and ships were out in cyclone, Government orders probe 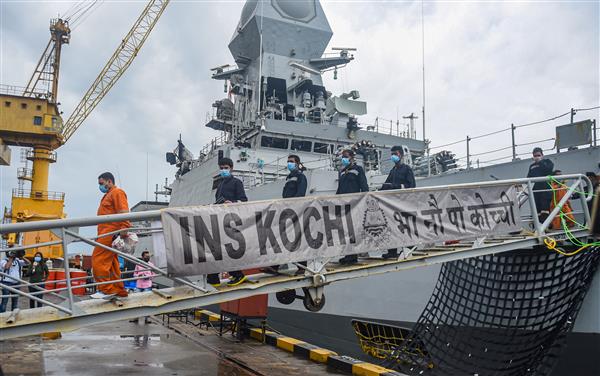 INS Kochi arrives at Mumbai Naval Dockyard with the rescued crew members of barge P305, in Mumbai on May 19, 2021. PTI photo

Even as it's unexplained why barges and ships were out at sea during the Cyclone Tauktae, the Government on Wednesday night ordered a high-level probe into the sequence of events that lead to the standing of these vessels putting more than 600 lives at risk.

There have been questions on why the specific warnings issued by the Coast Guard, since May 11,  asking all at sea, including those ships at oil-rigs, to ‘seek shelter’ were ignored.

On Wednesday, the Ministry of Information and Broadcasting tweeted saying the Ministry of Petroleum and Natural Gas has set up a high-level committee to enquire into the sequence of events leading to the stranding of ONGC vessels in the cyclone.  The stranding, drifting and subsequent events have led to the loss of several lives, it said.

The rescued recall horrors of being stranded in Cycline Tautkae

Three barges and three ships associated with oil-rigs went adrift on Monday.  Other than the Barge ‘P305’ that sunk, all others are safe, but sent a  scare across the country.

The P305, was used for the accommodation of engineers and technicians and was anchored at Heera oil fields in the Arabian Sea some 70 km southwest of Mumbai.

The Barge was carrying workmen and engineers of several sub-contractors who were executing work on part of M/s Afcons – a subsidiary of the Shapoorji Paloonji group. The project is of the Oil and Natural Gas Commission (ONGC) in Western Offshore fields in the Arabian Sea.

From May 11 onwards some 7,500 Indian flagged boats returned home and some 464 merchant vessels were re-routed away from path of the Cyclone.  Bombay High sat in the middle of the path of the cyclone. The fixed structures were not at risk the risk was to barges and ships