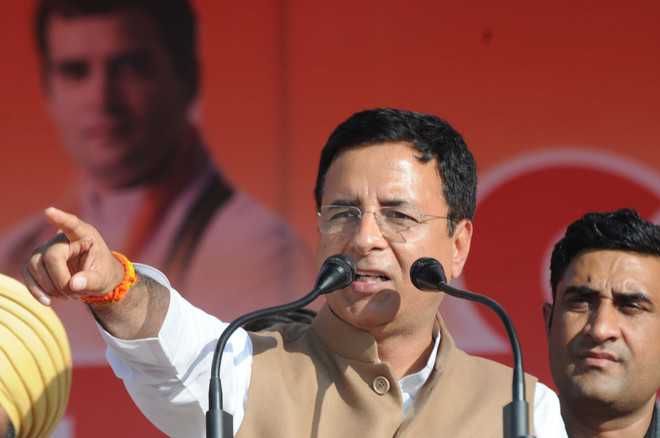 As agriculture-related bills were tabled in the Rajya Sabha, the Congress on Sunday stepped up its attack on the Centre over the issue and accused it of “running away” from giving legal responsibility for the Minimum Support Price (MSP).

Days after their passage in the Lok Sabha, Agriculture Minister Narendra Singh Tomar introduced the Farmers’ Produce Trade and Commerce (Promotion and Facilitation) Bill, 2020, and the Farmers (Empowerment and Protection) Agreement of Price Assurance and Farm Services Bill, 2020, in the Rajya Sabha.

Tomar said minimum price or MSP based procurement of agriculture crops from farmers will continue and is not related to the farm bills that seek to give cultivators freedom to market their produce.

Congress’ chief spokesperson Randeep Surjewala said the Modi government would get the “three black bills” passed in the Rajya Sabha through whip. “But no answer — how will the 15.5 crore farmers’ land get MSP, who will give?” Surjewala said.

The bills are also facing staunch opposition from farmer bodies as well as from within the ruling coalition. Harsimrat Kaur Badal, the food processing minister from the Shiromani Akali Dal party, resigned from the government last week.

Opposition parties led by the Congress criticised the farm bills tabled in Rajya Sabha on Sunday, saying they would not sign on the “death warrant” of farmers.

The Opposition charged that the two Bills were aimed at benefitting big corporates and ending the minimum price based procurement by the government.

The Rajya Sabha took up the discussion on The Farmers’ Produce Trade and Commerce (Promotion and Facilitation) Bill, 2020, and The Farmers (Empowerment and Protection) Agreement of Price Assurance and Farm Services Bill that have already been passed by Lok Sabha.

KK Ragesh (CPI-M), Derek O’Brien (TMC), Trichi Siva (DMK) and KC Venugopal (Congress) moved resolutions for sending the two bills to a select committee of the House for consideration before they are taken up for passage.

Initiating the discussion on these two bills, Congress leader Partap Singh Bajwa, who hails from Punjab, described the proposed laws as “ill-conceived and ill-timed” and said his party “completely rejects” them.

He said the bills were against landowners across the country, especially those of Punjab, Haryana and western Uttar Pradesh.

“We will not sign on death warrants of farmers,” he said.

With agriculture being a state subject, he said the bills are against the federal cooperative spirit.

“We do not want any tinkering in the APMC and the minimum support price (MSP),” he said and wondered what was the need to bring these bills during COVID-19.

Bajwa said farmers were on streets to protest against these two bills. “Those whom you want to benefit are on the streets.”

Bajwa said the bills have been brought with an “intention of ending the MSP (minimum support price) operations”.

“Slowly, the government will come out of this and then Ambani, Adani and big corporate houses will enter (market),” he alleged.

The Congress leader said the two bills were against the economic interest of Punjab, which has contributed a lot in making India self-sufficient in foodgrain production.

Defending the two Bills, Bhupender Yadav of the BJP charged that the Congress was doing politics over this issue and misleading farmers. PTI