Says some 7.5 lakh to 8 lakh Indian students go overseas looking for their future and in the process Rs 1.5 lakh crore flows out of the country. 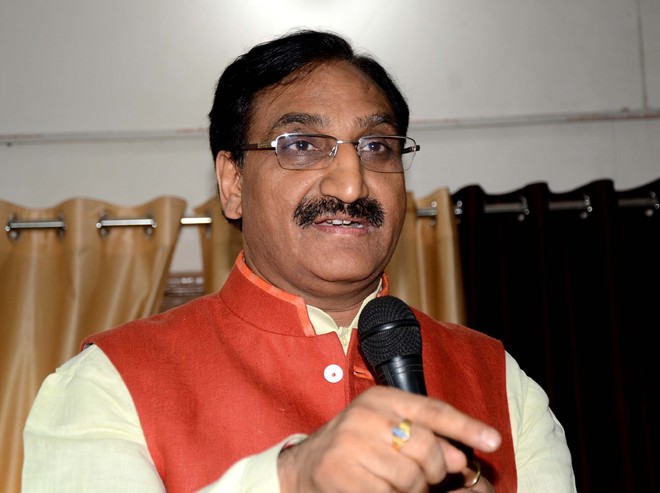 Asserting that the government will develop a new curriculum of management and engineering institutes together, Education Minister Ramesh Pokhriyal Nishank on Friday asserted that efforts would be made to stop talent and patents from leaving the country.

Saying that now onwards 5 per cent of the students of IIMs and IITs would work with the industry during their studies, the minister at the All India Management Association convocation said "now we will stop both talent and patent from leaving the country".

He said some 7.5 lakh to 8 lakh Indian students go overseas looking for their future and in the process, Rs 1.5 lakh crore flows out of the country.

“India is contributing to the excellence of other countries,” he observed, adding that the proof of the country' excellence in education reflects in CEOs of Google and Microsoft who studied in India.

Elaborating on the vision and aims of the recently announced New Education Policy, he described it as the foundation stone of a new golden India.

NEP is India-centric and technology-centric, he said, adding that India would be the first country in the world to introduce Artificial Intelligence as a subject from Class 6 in school.

The Minister congratulated AIMA students for receiving their management degrees, diplomas and certificates.

At the convocation held on Thursday, 17 students were presented PhDs in Business Administration, a course run by AIMA in partnership with Aligarh Muslim University. AIMA’s flagship Post-Graduate Diploma in Management was presented to 603 students. The Post-Graduate Diploma in IT Management was given to 13 students and 925 students were awarded certificates and diplomas for completing various short and specialised management courses.

Delivering the keynote address, AICTE Chairman Anil Sahasrabudhe appreciated AIMA for holding the country’s first entirely online convocation. He pointed out that Covid had allowed higher education and regulation to go online though AICTE had faced stiff resistance for two years in digitalizing the approval process.

AIMA president Sanjay Kirloskar hailed the Minister of Education for introducing a visionary education policy. “I congratulate the government for providing a state-of-the-art framework for modernising education in India,” he said. He appreciated the NEP for promoting India’s integration into the global education system and making India an education hub.