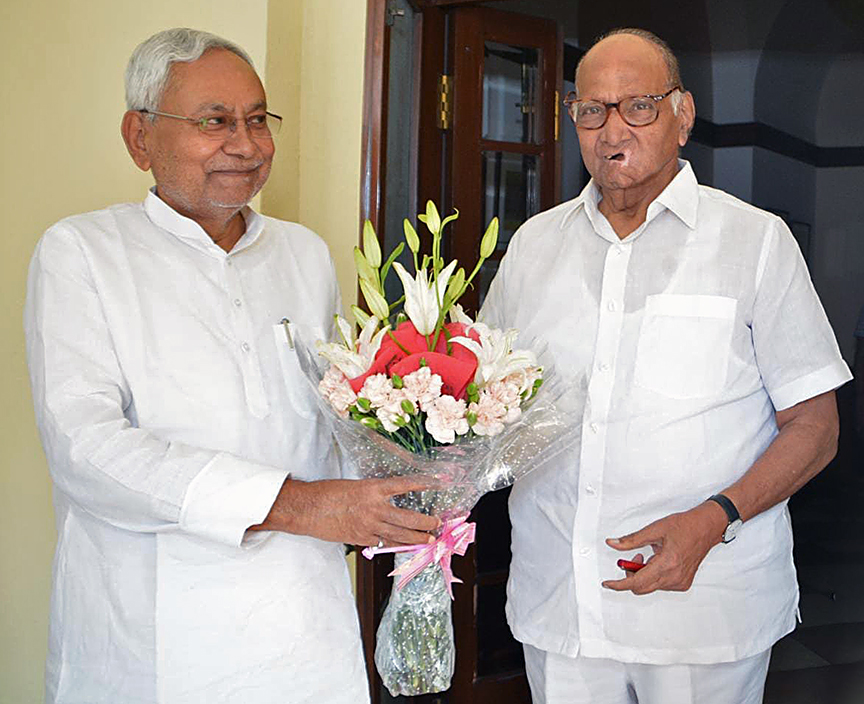 Continuing with his outreach efforts for Opposition unity, Bihar Chief Minister Nitish Kumar today met NCP supremo Sharad Pawar and CPI (ML) leader Dipankar Bhattacharya as the ruling BJP claimed that people in the country would not trust an “opportunistic” leader and alliance.

Both Pawar and I are keen on uniting Opposition forces, which are not with the BJP. Nitish Kumar, Bihar CM

Noting that the leader for the prospective Opposition alliance for the 2024 would be decided later, Kumar, after meeting Pawar said, it was more important to come together first, as he held deliberations with the NCP leader on the broad contours of the future grouping.

The JD-U leader said the time was ripe to present an alternative to the BJP which, he alleged, was “not doing anything for the people”. He went on to add that once all opposition parties came together on one platform it would be “the main front” and “not the third front”.

“Both Pawar and I are keen to unite opposition forces which are not with the BJP. A leader of the alliance can be decided later. It is important to come together first,” Kumar told reporters after a 30-minute meeting with the NCP supremo at the latter’s residence here.

Kumar also met Bhattacharya, who is lending support to the Mahagathbandhan government in Bihar with 12 of his MLAs from outside.

Kumar has been meeting leaders of the Opposition during his three-day visit to the Capital after he walked out of the alliance with the BJP in Bihar and formed a government along with the RJD and other parties.