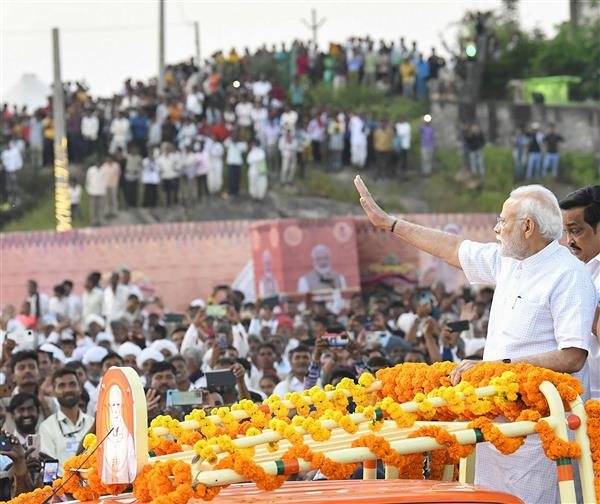 With eyes set on the coming Assembly polls in the state, projects worth a mammoth Rs 28,700 crore were gifted to Gujarat by Prime Minister Narendra Modi during his two-day trip to the state that concluded on Friday.

The trip, which started with kicking-off various projects in Surat worth Rs 3400 crore, came to an end with the PM dedicating and laying the foundation stones of various projects worth Rs 7,200 crore at the temple town of Ambaji in Banaskatha district.

The Prime Minister dedicated 45,000 houses built under the PM Awas Yojana to the recipients and laid the foundation stone for construction of 15,000 more such houses in the area. The Prime Minister also laid the foundation stone of Taranga Hill – Ambaji – Abu Road New Broad Gauge Line and the development of pilgrimage facilities at Ambaji temple under the PRASAD scheme.

The Prime Minister revealed that the Taranga Hill–Ambaji–Abu Road Line was conceived in 1930 during British rule. Though the need for this was recognised about 100 years ago, unfortunately, the work was not taken up, he said. “Perhaps, Maa Amba wished it to be done by me. It is our good fortune that in the year of Azadi ka Amrit Mahotsav, we are getting this opportunity to dedicate this at the feet of Amba Mata,” Modi said.

The Prime Minister said that his aim is to create so many attractions in the vicinity of the temple that people have to make a two-to-three-day programme to cover them. This will benefit the locals, he said.

Earlier in the day, the Prime Minister flagged off the Vande Bharat Express service between Gandhinagar and Mumbai. The train is expected to cover the distance between the two cities in about five and a half hours.

Assembly elections are slated to take place in Gujarat later this year.