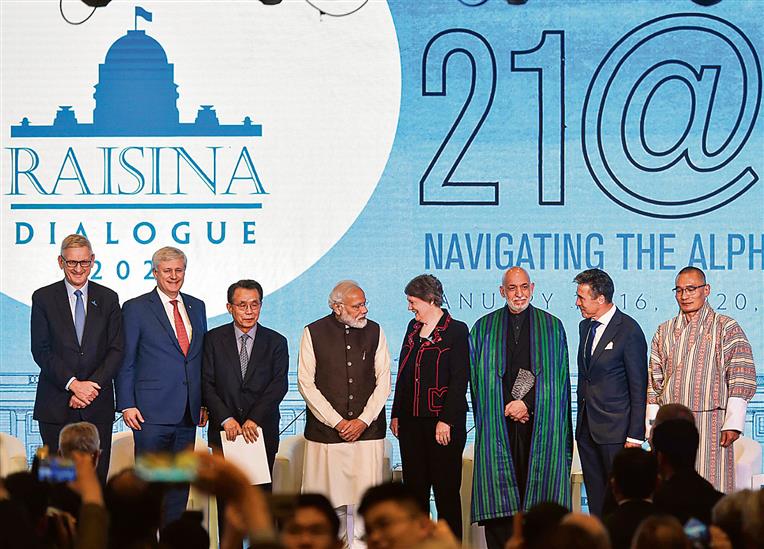 Prime Minister Narendra Modi with delegates during the inaugural session of Raisina Dialogue in New Delhi on Tuesday. PTI

Flagging issues of democracy, climate change, multilateralism and technology as four key challenges for the third decade of this millennium, leaders from across continents today underscored the need for India to take a leadership role.

With PM Narendra Modi in audience at the inauguration of the fifth edition of Raisina Dialogue, leaders held the view that these areas are around which leaders and policymakers should be working, since these would be affecting people across the globe in coming years.

The format of the panel discussion came after Australian Prime Minister Scott Morrison, scheduled to deliver the keynote address, cancelled the programme due to crisis created by raging bushfires.

In his assessment, Bildt said, “While technology will be a driving force each country will have to master it and cannot either control, the way China did, or block it like the United States. This technology requires brains and not natural resources driven technology that marked previous industrial revolutions. Transformation to digital age cannot happen by defeating it. India can play a crucial role since the country is there when the digital age is starting, by attempting to create a digital society and economy to make it both affordable and available.”

Rasmussen advocated a global alliance of democracies that would raise voice against authoritarians and hoped India under the leadership of PM Modi engage more on it.

Talking of Indo-Pacific, Harper said, “While there exists diversity of views on it, he said the reality is the role played by India. It is a tribute to PM Modi’s vision.”

Hoping that the Afghan peace process would eventually lead to the betterment of Afghanistan and its people, Karzai said he felt India should have a pro-active foreign policy in the region. External Affairs Minister S Jaishankar noted the dialogue was able to achieve a substantial measure of the vision of PM Modi, who had suggested that as a rising power, while pursuing its foreign policy, India should be able to shape the narrative through this flagship geopolitical and geo-economics conversation.