This comes as the prices of petrol and diesel are increasing continuously for several days and in some states, the price of petrol has even crossed Rs 100 mark 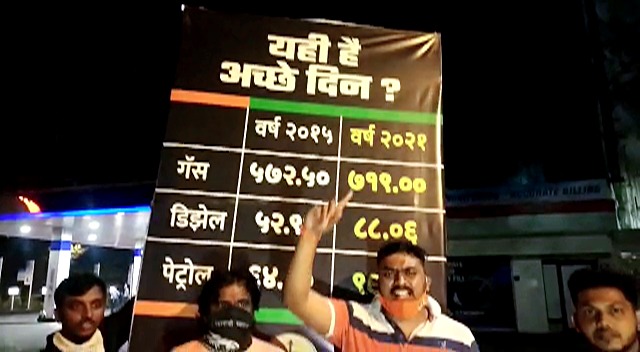 Shiv Sena activists shout slogans and protest with a banner against fuel price hike at various petrol pumps in Mumbai on Monday. ANI

As the prices of petrol and diesel in the country are on a constant rise, Yuva Sena, the youth wing of Shiv Sena has put up banners stating ‘Yahi hai acche din?’ at various petrol pumps and roadsides in Mumbai, in a bid to register their protest against the BJP-led NDA government at the Centre.

This comes as the prices of petrol and diesel are increasing continuously for several days and in some states, the price of petrol has even crossed Rs 100 mark.

Union Petroleum and Natural Gas and Steel Minister Dharmendra Pradhan on Sunday had termed “less fuel production by manufacturing countries to gain more profit”, as one of the reasons behind the price hike.

“There are two main reasons behind the fuel price rise. The international market has reduced fuel production and manufacturing countries are producing less fuel to gain more profit. This is making the consumer countries suffer,” Pradhan had told ANI during his visit to inspect the venue where Prime Minister Narendra Modi is scheduled to address a rally in Assam’s Dhemaji on Monday.

The Shiv Sena leader also said that he had read the government’s statement that the Centre is not responsible for the rising prices of petrol and diesel but the previous government.

“You are at the Centre for 7 years with full majority, but whenever any question rises including inflation, corruption, national security matters or China enters the Indian territories, the answer of this government always remains the same,” he had said. —ANI