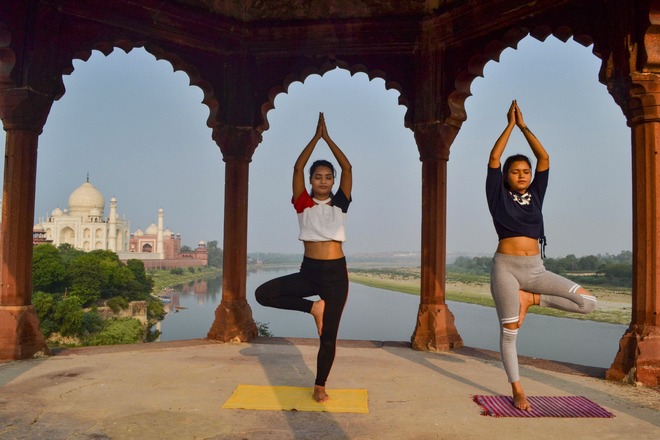 Yoga enthusiasts near Taj Mahal in Agra on Sunday. PTI

On the eve of the seventh International Yoga Day celebrations to be led by Prime Minister Narendra Modi tomorrow, AIIMS Delhi experts backed meditation and yoga as additional therapies for glaucoma and rheumatoid arthritis citing clinical evidence to this effect.

Senior experts Tanuj Dada and Karthikeyan Mahalingam of the Rajendra Prasad Centre for Ophthalmic Sciences, AIIMS, today said meditation had been proved to work in glaucoma as an additional therapy in a study on patients at the institution.

“In a recent trial conducted at our centre to evaluate the effect of mindfulness meditation on trabecular meshwork gene expression — the role of particular genes — in glaucoma patients, it was found that meditation alters gene expression, positively modulating cellular mechanisms involved in glaucoma pathogenesis thereby indicating its direct impact on ocular tissues,” the experts said.

Glaucoma is the leading cause of irreversible blindness with stress known to worsen the condition.

“Younger patients have more propensity for anxiety and depression is more common in the geriatric population. The National Health and Aging Trends study showed a bidirectional relationship between mental health disorders and visual impairment. The role of meditation in treating glaucoma can’t be overemphasised,” the AIIMS findings suggest. In another study today, AIIMS doctors reported major benefits of yoga-based lifestyle in making positive impacts on the patients of rheumatoid arthritis.