Officials also said till last year around 50,000 to one lakh people used to offer namaz on roads and other places 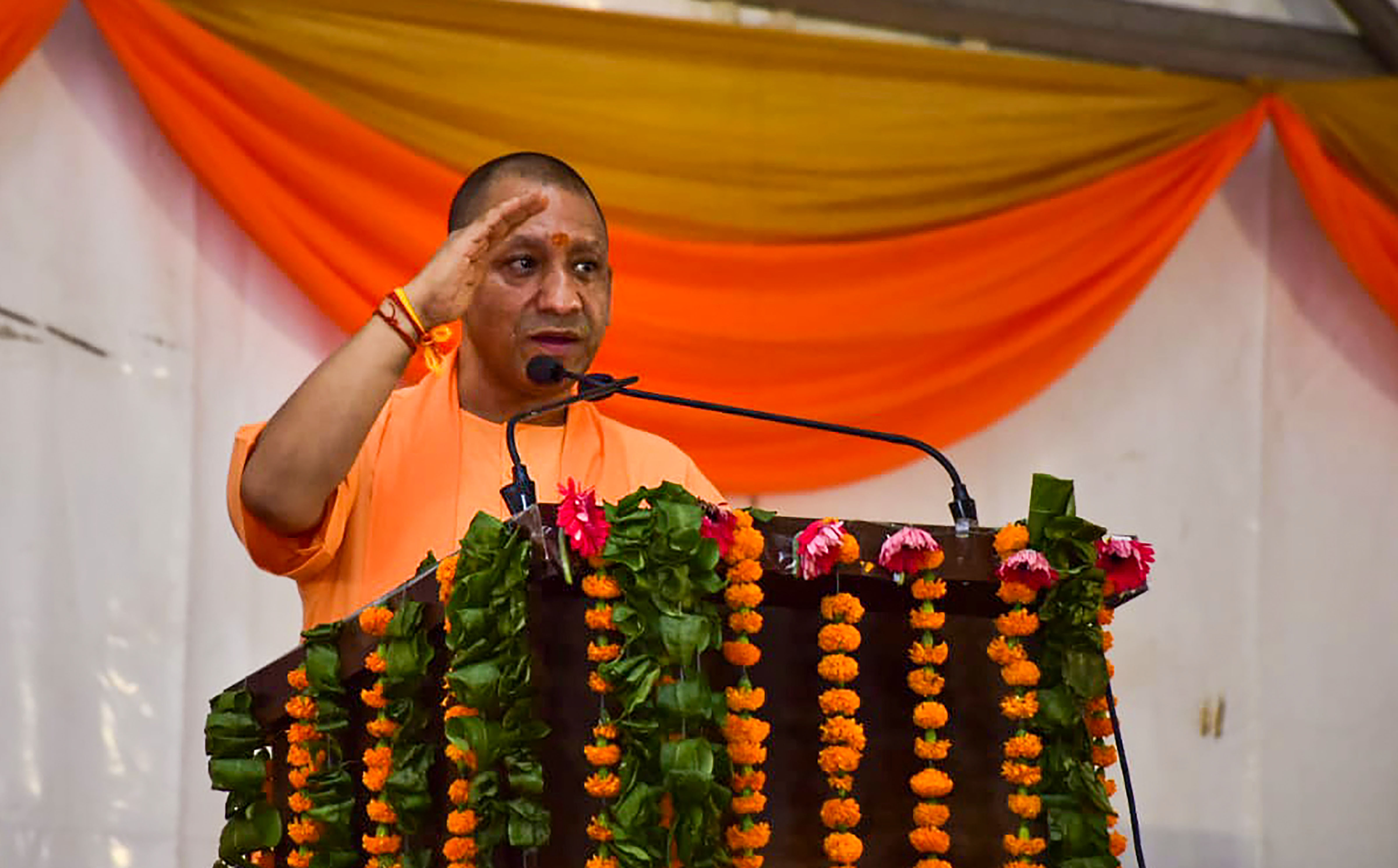 Uttar Pradesh Chief Minister Yogi Adityanath speaks during the unveiling ceremony of the statue of his guru Mahant Avaidyanath, at Yamkeshwar, in Pauri Garhwal district on May 3, 2022. PTI

With UP celebrating Eid-ul-Fitr, Akshay Tritiya and Parshuram Jayanti amid the state's "Ganga-Jamuni tehzeeb" peacefully on Tuesday, Chief Minister Yogi Adityanath lauded people for "not organising" religious events on roads.

Adityanath praised the people as officials said it was for the first time that Eid namaz was not offered on roads.

For example, in Loni and Hapur, owing to a shortage of space in mosques, the namaz was offered in shifts, they said.

Officials also said till last year around 50,000 to one lakh people used to offer namaz on roads and other places.

Kumar thanked them saying the state celebrated the festivals amid its "traditional Ganga-Jamuni tehzeeb", which would be on display in future festivals as well.

Chief Minister Adityanath took to Twitter to praise the people.

"Today, a number of religious events were successfully held in Uttar Pradesh. The people of the state have taken a good initiative by not organising them on roads," he twitted in Hindi.

"For a healthy and harmonious society, it is necessary that along with respect for the faith, there should also be a rule of law. This will become the foundation for the development of the state and self-reliance of citizens," Adityanath said.

ADG (Law and Order) Kumar earlier told PTI that Eid was peacefully celebrated in the state.

"The festival of Eid was celebrated peacefully and namaz was offered at around 32,000 mosques and Eidgah maidans in the state. No untoward incident of any kind took place anywhere in the state and people celebrated Eid with traditional fervour and gaiety," Kumar said.

Akshay Tritiya and Parshuram Jayanti too were celebrated on Tuesday, he said and added, “Offering namaz at public places like roads and parks was not allowed." "Arrangements were made so to ensure that no untoward incident takes place," he said, adding in addition to the civil police, 46 PAC companies, seven of CAPF along with gazetted officers were deployed.

He said foolproof arrangements for namaz at the identified places were made with consultations with religious leaders.

He thanked religious leaders for their cooperation and said "with Ganga-Jamuni Tehzeeb on display, such participation will be seen in upcoming festivals" too.

In Lucknow, under the directives of Joint Commissioner of Police (Law and Order) Piyush Mordia, officials along with the police force made regular rounds in the city and the Eid namaz at Eidgah in Aishbagh and Tiley Waale Masjid were held peacefully, he added.

In Lucknow, over five lakh people, including a large number of women, offered namaz at the Eidgah maidan here on the occasion of Eid-ul-Fitr.

Reports from various districts said all three inter-faith festivals on the day were celebrated peacefully.

In Ayodhya, thousands of Muslims performed namaz at Eidgah in the civil lines area with the district administration having barricaded the venue for security.

In Meerut, breaking from the past when devotees used to offer namaz on roads and other public places, the people recited the prayer in the Shahi Eidgah premises.

In Saharanpur and Deoband, Eid was celebrated peacefully with namaz read in mosques and Eidgah compounds, Senior Superintendent of Police Akash Tomar said.