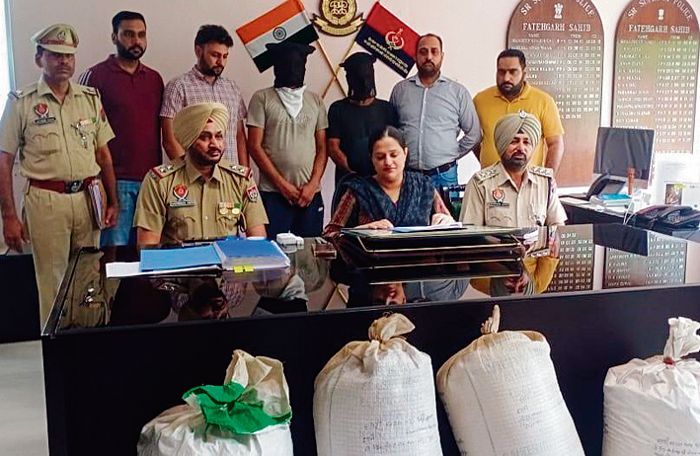 The police claims to have busted a gang of drug suppliers with the arrest of two peddlers and seized 80 kg of poppy husk from them, which they had brought from Jharkhand and were going to supply in surrounding areas of Ludhiana.

Addressing the media the SSP, Dr Ravjot Grewal, said the anti-narcotic and special cell team of the district police led by Inspector Harminder Singh had laid a naka near Multani Dhaba on GT Road, Sirhind, for checking of vehicles. The police signalled a truck (bearing registration No. PB-10H-1382) to stop for checking at the naka, the SSP said.

During search the police seized 80 kg of poppy husk hidden in a specially designed box of the truck, the SSP said.

During preliminary interrogation, the peddlers revealed that they used to bring poppy husk and other drugs from Jharkhand and supply these in and around Ludhiana, the SSP added. They had been supplying drugs in the area for a long time, the SSP said. The police would seek their remand from court in order to bust the entire drug supply line, the SSP added.

The police would seek their remand from court in order to bust the entire drug supply line, the SSP added.