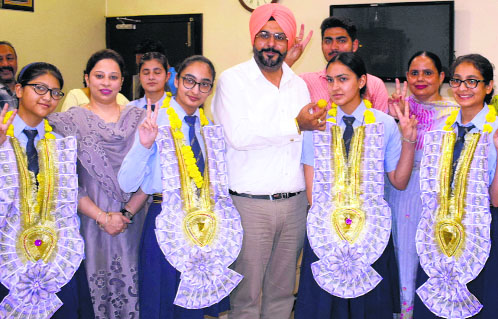 Meritorious students being felicitated by the school management in Patiala on Saturday. tribune photo: Rajesh Sachar

Three students of Play Ways Senior Secondary School, Patiala, scored cent per cent marks in the Class XII exams, results for which were declared by the Punjab School Education Board (PSEB) on Friday.

Talking about online studies, Palakdeep said, “It took some time to adapt. However, the school launched an application where we were provided with recorded lectures. It helped us a lot.”

Another topper, Priyanka Wadhva, said being disciplined helped her a lot. “My teachers always told me to be regular and study every day... teachers had prepared a schedule which I followed.”