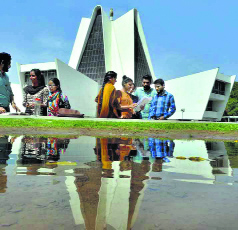 In a collective discussion held yesterday, the Vice-Chancellors — Prof Arvind of Punjabi University, Prof Karamjit Singh of Jagat Guru Nanak Dev Punjab State Open University, Prof GS Bajpai of Rajiv Gandhi National University of Law (RGNUL), Lt Jagbir Singh Cheema of Maharaja Bhupinder Singh Punjab Sports University — said Patiala region had developed as an education hub of the state and it was time that to project it as such.

There was hardly any city in North India where four state universities, including two dedicated towards a field, were functional, they added.

In order to improve academic culture and ensure easy sharing of information, the universities would soon sign memorandums of understanding (MoUs), engage in resource sharing and hold collective academic seminars on ration basis for students, they said.

Universities would possibly exchange their faculty members, who would be sent on deputation to sister university, they added.

“We want students of all four universities to engage with each other and share information. This will open horizons of knowledge. A few of these decisions were taken today,” said Prof Arvind.

“Monthly seminars will be held on rotation and begin with the upcoming academic session,” he said.

The Vice-Chancellors also aim to form a consortium of universities wherein private institutions will be included for sharing of ideas and taking initiatives.

The four universities would provide a new direction to the academic culture with co-operation and collective efforts, said Dr Karamjit Singh.