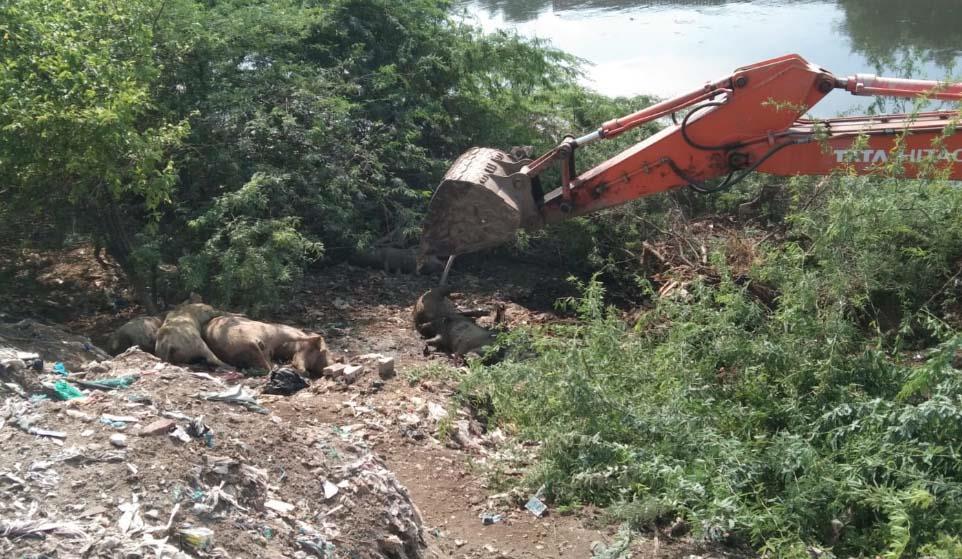 Nearly 300 pigs died around Chhoti and Bari Nadi over a week ago due to African swine fever. Tribune photo

Nearly 300 pigs died around Chhoti and Bari Nadi over a week ago due to African swine fever. The disease is not yet known to be communicable to humans, but the state government has notified it. Also, the district administration in order to prevent the spread of disease has taken steps to stop rearing and movement of pigs at the specific areas, including Sanouri Adda, Cheeka Road and Bilaspur village, in Patiala district.

Over 200 pigs were initially reported dead due to unspecified reasons around Badi Nadi here between August 7 to 9. Officials of the Animal Husbandry Department sent samples of pig swabs, blood and skin to the Regional Disease Diagnostics Laboratory , Jalandhar, for diagnostics. Besides, the district Health Department as a precautionary measure also tested employees of the MC and handlers of pigs for swine flu, but none was found infected.

The ICAR-National Institute of High Security Animal Diseases, Bhopal, has confirmed African swine fever in swine samples of Patiala district. As such, the whole state has been declared a ‘controlled area’ to prevent, control and eradicate disease. —Sakshi Sawhney, Deputy Commissioner

Though contacted repeatedly over the matter on Friday, the Deputy Director, Animal Husbandry Department, Dr Gurcharan Singh, failed to share details of test reports. Meanwhile, the district administration said the reports of tests were received, which confirmed infection of the African swine fever among pigs. The government has notified Bilaspur village and Sanauri Adda in Patiala as the epicentre of the disease.

The state government stated, “As a precautionary measure, pigs, pig products or related goods from piggeries will not be taken out of or brought into the infected zone.