Scuffle with farmers averted during the protest 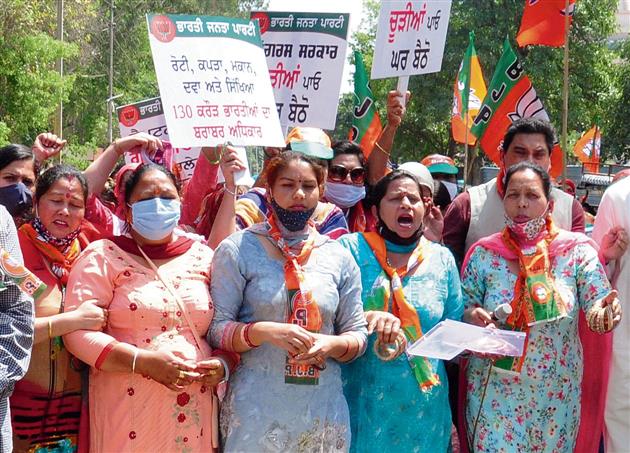 The BJP Mahila Morcha held a protest outside the residence of Punjab Chief Minister Capt Amarinder Singh in the city today. A scuffle was averted as the police intervened between Mahila Morcha activists and farmers, who have been holding a protest at the site for the past many days.

Citing the attack and disrobing of the BJP MLA, Arun Narang, in Abohar, the protesters alleged that leaders of the party were being attacked in the state, which was done in the name of farmers’ protest.

They also alleged that the state government led by the Congress had failed to deliver even on a single assurance given before elections.

Meanwhile, farmers owing allegiance to the Kisan Road Sangharsh Committee, who are camping outside the CM residence for the past many days, attempted to stop leaders and workers of the BJP from holding a protest at the site.

The BJP-led government at the Centre had passed agriculture bills that were against farming community, farmers said. As such, they would not allow the BJP Mahila Morcha to hold any protests at the site, farmers added. Police officials, who were present on the spot, intervened and managed to avert scuffle between farmers and morcha activists. — TNS