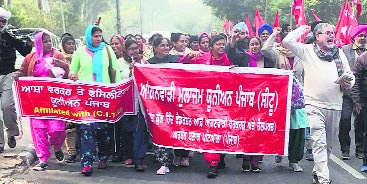 In support of the protesting farmers at Delhi borders, hundreds of ASHA and anganwadi workers under the banner of Centre of Indian Trade Unions (CITU) tried to court arrest outside the district administrative complex today. However, the police did not arrest them.

Before the symbolic arrest, protesters staged a sit-in near the district administrative complex for hours’ altogether. The protesters said new farm bills passed by the Central Government would destroy the agriculture sector. The Modi government was making efforts to privatise every sector to help big corporate, they added.

Amritpal Kaur, an anganwadi worker, said, “The Modi government has been making laws – including agriculture – that favour only big corporate. However, we will not let them do what they want to. We will continue our protest until the laws are repealed.”

Workers said they had protested at Delhi borders in the past and would continue to do so in future also. They had decided to protest at the district level against the agriculture bills, workers added.

Harinder Kaur, an ASHA worker, said, it was wrong to say that the farm laws would not have any adverse impact on the agriculture sector. Every section of society would face the brunt of these laws if implemented, she added.

“ASHA workers will continue to protest come what may until the farm laws are repealed,” she said.