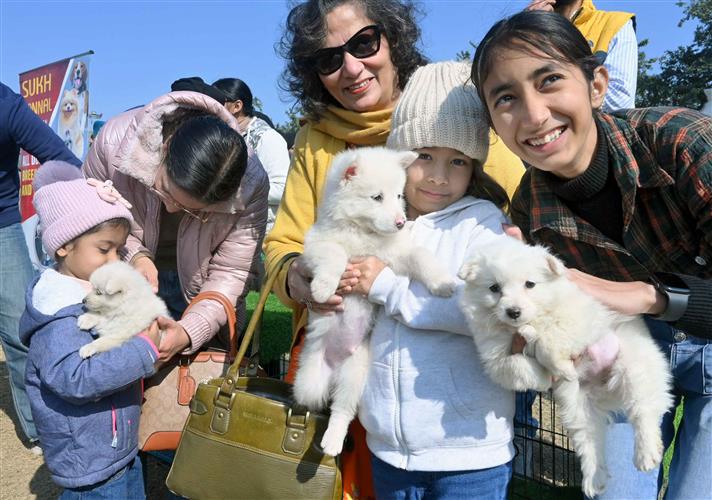 As many as 230 dogs of 40 breeds were part of dog show at Polo Ground.

Illegal sale of dogs was rampant outside the venue of the annual dog show that returned to the city today after a gap of two years due to the pandemic. While the district administration organised the dog show as part of the Patiala Heritage Festival-2023, dog breeders minted gold and illegally sold pups at and outside the Polo Ground. Some of them were even a month old.

The little pups on sale shivered in the cold and huddled together throughout the day. They were available for takeaway without a proper check.

The breeders charged Rs 18,000 for an American Bully puppy, Rs 5,500 for Pomeranian, Rs 7,000 for Golden Retriever, while the Chow Chow and Tibetan Mastiff fetched Rs 30,000 and Rs 40,000, respectively. The male and female dogs fetched different prices. The exorbitant prices dropped by the dusk.

Meanwhile, the district administration said a total of 230 dogs of 40 breeds participated in the dog show. Exhibitors from Jammu and Kashmir, Uttar Pradesh, Delhi, Haryana and other parts of the country took part in the show.

An inspector at the Department of Animal Husbandry said, “The pups should not be sold in less than 45 days of birth. The first shot of vaccine is administered after 45 days. ”