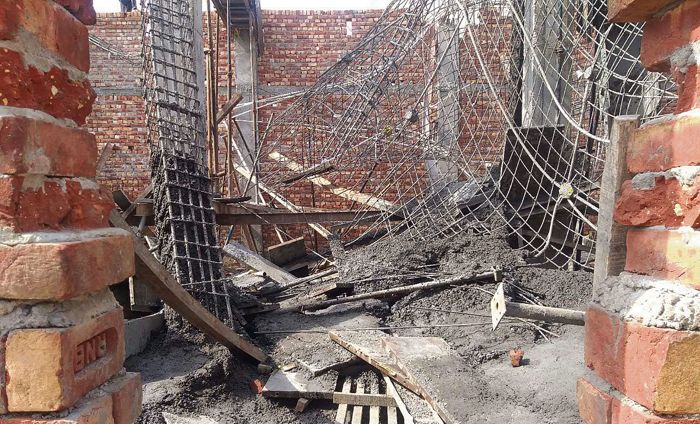 An illegal under-construction building adjacent to the new sabzi mandi that collapsed in Patiala. File

Initiating strict action against violations, the Municipal Corporation (MC) has written to the Police Department to register FIRs against three building owners for carrying out construction work despite sealing of their properties.

Corporation officials said the building owners disobeyed the order promulgated by a civil servant and as such, a criminal case would be registered against them.

Sharing information, Municipal Corporation Commissioner Aaditya Uppla today said one of the building owners had pasted a white paper sheet on the civic body notice. “The owners continued construction despite issuance of MC notice to them and sealing of their illegal buildings. They stopped construction when the Corporation team reached construction sites,” he said.

Meanwhile, the Corporation is yet to ensure that owners do not occupy buildings without seeking completion certificates. According to the building laws, property owners are bound to inform the authority concerned on the completion of construction of every level of an under-construction building. But most refrain from seeking the mandatory certificates, which is the main reason behind flouting of the municipal laws.

Only a few building owners, including those, who want to rent out their properties to MNCs, apply for completion certificates as these are mandatory in their case.

MC Commissioner Aaditya Uppal said, “The Corporation is working on the issue. People do not seek completion certificates throughout the state. We held a meeting to discuss the matter and will soon start instructing people to seek mandatory certificates before occupancy of their buildings.”