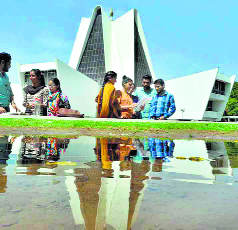 This is while the university has failed to properly implement the previously launched Golden Heart Scholarship Scheme under which many students, who studied the course, did not pay back fee contrary to the conditions.

As per new rules under consideration, letters of which are in possession of The Tribune, the university will provide a fee concession from 20 to 100 per cent for BTech (Computer science, mechanical engineering and electronics and communication engineering) regular and lateral entry courses. Hundred per cent fee waiver will be given to those scoring 90 per cent marks in Class XII exams.

Officials at the centre expect the student count to go up if fee at the YCoE is kept equal to or less than that of other government engineering colleges in the area.

Similarly, for the three year and lateral entry diploma course, the university is contemplating a concession ranging from 70 per cent of the total fee for those, who score above 60 per cent marks and up to 100 per cent for students getting 90 per cent and above in qualifying Class X or ITI exams.

This is contrary to conditions of the Golden Heart Scholarship Scheme being run since 2004 under which the university has failed to recover interest-free loans running into crores given to BTech students.

The scheme was launched to impart technical education in backward rural areas under which over 2,400 students were admitted till date. Despite launch of the scheme student count has come down with each passing year.

The university Dean, External Centres, Dr Pushpinder Singh Gill, has already raised concern over financial condition of the university and demanded that the decision be re-examined. He was, however, not available for his comments.

The centre director, Dr Gursharan Singh Randhawa, who proposed fee concession for students to the university administration, said the matter was being addressed. “The university has held a meeting to discuss the matter. I was also present at the meeting. We will soon take a decision in this regard,” he added.

The university Dean (Academics), Dr BS Sandhu, said, “The file has moved. It is under consideration, but not finalised yet.”