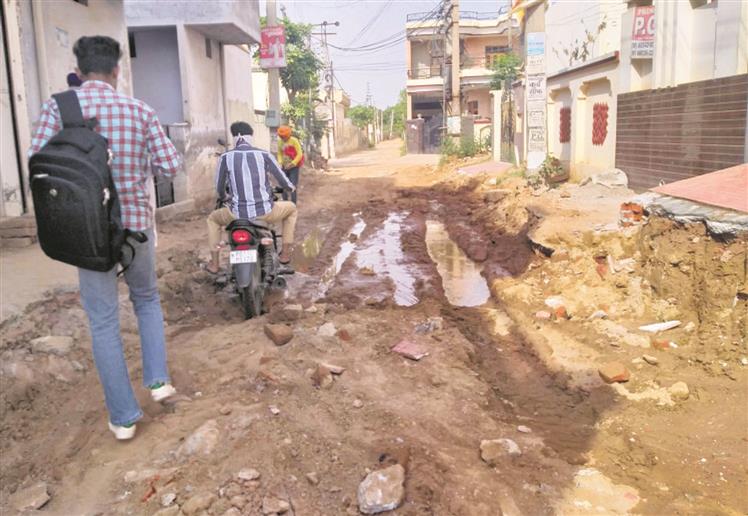 A road dug up for laying a sewer pipe at Professor Colony in Karheri village. Tribune photo

Karheri village, adjacent to Punjabi University, is among 10 other villages, which will get sewerage connections for households. But, residents of the village have complained that the slow pace of work is inconveniencing them.

The work of laying sewerage pipes was being carried out by government departments, residents added. “The work has been going on since weeks altogether. Earlier, they dug out earth and constructed tanks and laid sewerage pipes. Now, the work of covering these is going on,” a resident said.

“Some residents have raised objections over the work not being carried out as per the protocol. The work of repairing roads, dug up for laying sewerage, is pending. Broken roads have made commuting difficult for residents,” another resident added.

The Karheri village sarpanch, Amarjit Singh Nirman, said the work of laying sewerage was being carried out according to the protocol. “Sewerage pipes are being laid by the Punjab Sanitation Board,” he added.

“The area has been without sewerage connection for many years. But this time, the state government is spending Rs46 crore on sewerage works in 10 villages, including our village. The sewerage connections are being laid after which the restoration work of roads will be initiated from funds of the Rural and Panchayat Development Department,” he said.