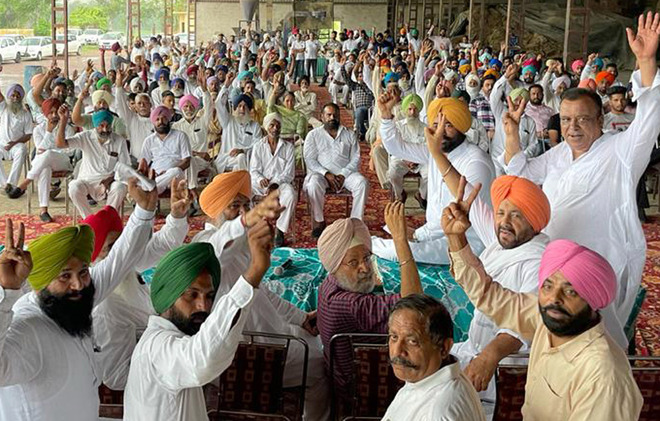 Hundreds of Congress workers, including sarpanches and zila parishad members, have raised a banner of revolt against Ghanaur MLA Madan Lal Jalalpur, urging the party high command not to allot him the ticket this time.

However, Jalalpur said these workers had not worked for the Congress in the past parliamentary polls, so had already been “sidelined”.

I have never tolerated illegal mining and liquor trade. My constituency is free of these two menaces due to my personal intervention. A majority of those opposing me are Akali agents.

Many senior leaders, including former and incumbent sarpanches, and zila parishad and block samiti members, of over 100 villages at a meeting here announced to oppose Jalalpur. They further demanded an independent probe into illegal liquor and mining cases in Ghanaur.

Many of those present at the meeting claimed to be associated with the party for over three decades, including former sarpanch Karnail Singh, nagar panchayat member Mohan Singh, zila parishad member Palwinder Singh Lali and block samiti member Chatinder Vir Singh.

“The MLA and his coterie have been shielding illegal mining mafia and liquor trade. The sole purpose to elect him as the MLA was to ensure development of the constituency, which has been completely lost,” they claimed.

“Our fight is against corruption and illegal mafia taking control of our constituency. The sand tipper worth Rs 2,700 five years ago is now being sold for Rs 5,000, while majority of the sand from our constituency is being illegally smuggled outside the district,” said Karnail Singh and PS Lali.

They further alleged that illegal liquor factories unearthed in the past had direct involvement of a Congress sarpanch close to Jalalpur but “no action was taken in that case as no money was recovered in the case despite liquor worth crores sold by them illegally”.

“Only a faction of illegal liquor mafia is operational with direct backing, while all others have been told to shut operations or face FIRs,” said block samiti members Chatinder Vir Singh and former Ghanaur party president Sham Lal. The Congress workers say they will approach newly elected PCC chief Navjot Singh Sidhu and Capt Amarinder Singh, urging them not to allot ticket to Jalalpur. Refuting the allegations, Jalalpur said these Congress leaders were “working against the party since 2017 and were involved in illegal liquor trade, which he ensured was raided and foiled”.