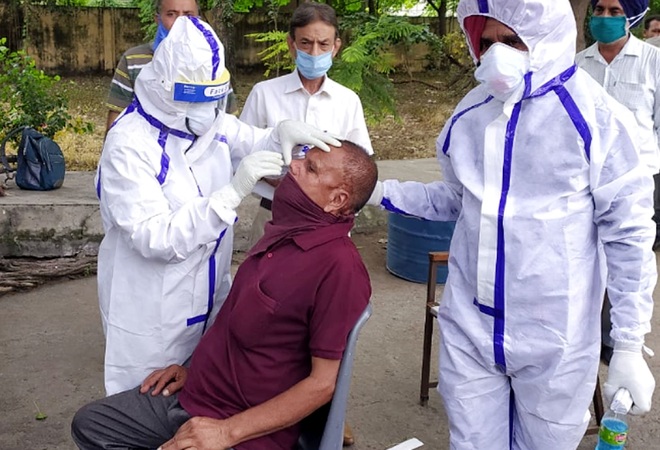 Gurminder Singh (name changed) of the Ragho Majra area here was in for a rude shock when the health authorities informed him on Sunday morning he had tested positive for Covid-19. This came a day after he received an automated message from the Punjab Government that his ‘RT-PCR sample’ had tested negative.

Civil Surgeon Dr Harish Malhotra blamed it on a technical glitch in the “RT-PCR application” that generated a common Specimen Referral Form (SRF) ID of a patient even if two separate samples — for rapid antigen test and RT-PCR — were taken.

We have been receiving reports of confusion among patients. We have already raised the matter with the state Health Department—Dr Sumeet Singh, Epidemiologist

“I have asked the authorities to stop the automated messages as it creates confusion among people,” he said.

Gurminder, 40, refused to believe the test result amid rumours that doctors were deliberately declaring healthy people positive. Health officials had to counsel him for hours before he agreed for home isolation.

An investigation by The Tribune revealed patients had been getting automated messages of test results of RT-PCR even before the samples went for testing to the Government Medical College lab.

The Health Department claimed the first message to patients was of the rapid antigen test and not the RT-PCR, the standard test for Covid-19. The message erroneously showed it as RT-PCR result.

A medical officer, explaining the process, said: “We take two samples (RT- PCR and antigen) in cases of high-risk and symptomatic patients. It takes 15 minutes for the antigen test to come through.

“But when we submit the antigen test result on the RT-PCR application, it shows as RT-PCR sample, instead of antigen. Thereafter, when the RT-PCR sample test report comes from the lab, and if it contradicts with earlier test of antigen, it fuels mistrust among people.”