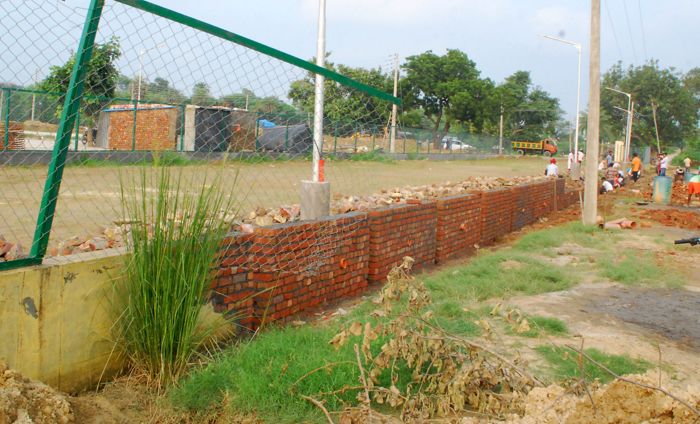 Questions are being raised over the planning and execution of various government projects in the city after a newly constructed wall of the dairy shifting project of the Municipal Corporation (MC) at Ablowal village collapsed today.

The incident was reported a day after the work at Rajindra Lake drew flak from various quarters over lack of proper planning.

A wall of Rajindra Lake was renovated recently. The lake was opened for the public after over 14 years. The renovated wall of the lake got damaged yesterday.

The Public Works Department (PWD), along with others, spent Rs5.04 crore on the project. Department officials when questioned claimed that the basic structure of the site that collapsed was neither altered nor changed during renovation. The particular wall of the lake collapsed on Wednesday after it rained on Tuesday.

The PWD Executive Engineer clarified that the wall, which collapsed, was not part of the restoration work completed recently. “During restoration and beautification of the site planters’ wall around the monumental area of Mahatma Gandhi statue was not tampered,” he stated in a press release.

Local leaders of the opposition parties have raised questions over planning and execution of works. They said the wall collapsed after it rained.

Meanwhile, civic body officials said the 50-metre wall had collapsed due to contractor’s mistake. A truck had rammed into the wall on Tuesday, they added.

When contacted Municipal Commissioner Poonamdeep Kaur said, “A truck owned by contractor rammed into the wall on Tuesday. The work on the project is still in progress. The contractor will repair the wall.”

Dairy farmers have been given an ultimatum to shift to the site by September end.

Former Mayor Ajit Pal Singh Kohli said, “Development works are carried out without any scientific study. Decisions are taken at the XEN level. This is while all the leadership in the city, including councillors, the Chief Minister and the Member Parliament, are from the same party.”

“Lapses in works are now deliberately covered. This time they have failed miserably in completing works. It should be checked whether their contractors comply with the norms and execute tasks properly or not,” the former Mayor added.