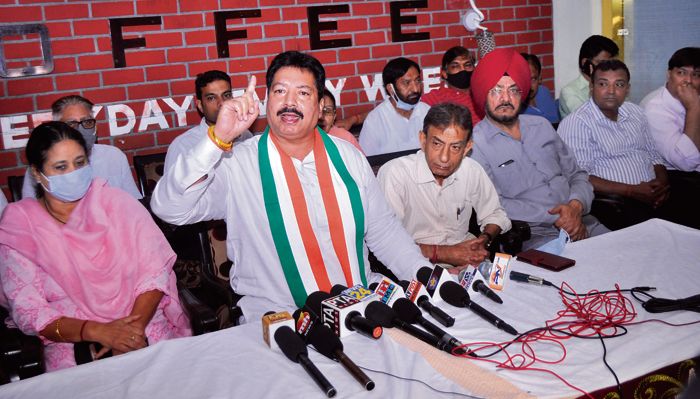 The issue of corruption in the Municipal Corporation has snowballed into a major controversy. Senior Congress leaders from the city alleged corruption by each other, in separate press statements issued here today.

President of DCC KK Malhotra and PRTC Chairman KK Sharma, along with District Planning Committee Chairman Santokh Singh, sought that party leaders should contain their differences on the party platform.

Malhotra said the party leadership was ashamed of Krishan Chand’s statements against senior leaders, and said: “In any circumstances, the senior leader in the city (Krishan) should have approached the district leadership to express his discontentment, if any. He should not level false charges against party leaders for political mileage.”

Narinder Pal Verma (Lalli), senior vice-chairman of PUNSUP, said Krishan Chand should not raise allegations of corruption against others as he himself was facing corruption charges.

Responding to it, Krishan Chand said: “Narinder Lalli should prove the allegations against me. Narinder himself remained in jail for 101 days for illegal possession of a house after being held guilty by the court and later he had joined the SAD camp. He joined Pratap Bajwa when the latter had differences with Captain Amarinder Singh and also helped Dharamvira Gandhi win elections against MP Preneet Kaur in 2014.”

Lalli refuted the allegations of having joined SAD or Dhramvira Gandhi.

In a letter to Punjab Congress chief Navjot Singh Sidhu, Punsup vice-chairman Krishan Chand Budhu has accused Patiala Mayor Sanjeev Bittu of shielding “illegal building mafia and colonisers”. “Already the morale of Congress workers in Patiala is low and many of them plan to quit the party due to massive corruption led by the Mayor. His assets need to be probed,” he wrote. “We have high hopes from Sidhu as the CM’s inaccessibility has led to such a situation where a selective close coterie to New Moti Bagh Palace is running a parallel, but corrupt government,” he said.

However, Patiala Mayor Sanjeev Bittu said the allegations were politically motivated as he was a contender for ticket in 2022. “My rivals are trying to play dirty politics, without any proof. Funds allocated by the government through us are spent by the officers. There is no way I can be held responsible for it,” said Bittu, warning that he would file a defamation case against Budhu.