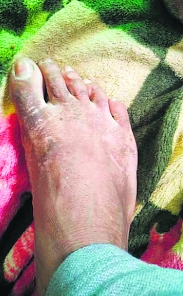 The health of protesting teachers is deteriorating with each passing day.

The two ETT teachers, who have been protesting atop a mobile tower for about 38 days, have developed a skin condition. The health of both teachers is said to have been deteriorating. The teachers, in a video message, said their skin had turned dead due to the lack of proper food.

Talking to The Tribune over the phone, Surinder Pal, one of the protesting teachers, said: “Our health is deteriorating. Come what may, we will not climb down until the government hands us appointment letters.”

Another teacher, Harjeet Mansa, said: “We will not come down until our demands are met.” The teachers said they (teachers) had eaten food provided by the district administration last week. Since then, they had not eaten anything, they said.

Meanwhile, experts said changes in the skin of the two teachers might be a result of emaciation (extreme weight loss and unnatural thinness due to a loss of subcutaneous fat). The doctors said it could also be due to a lack of nutrients.