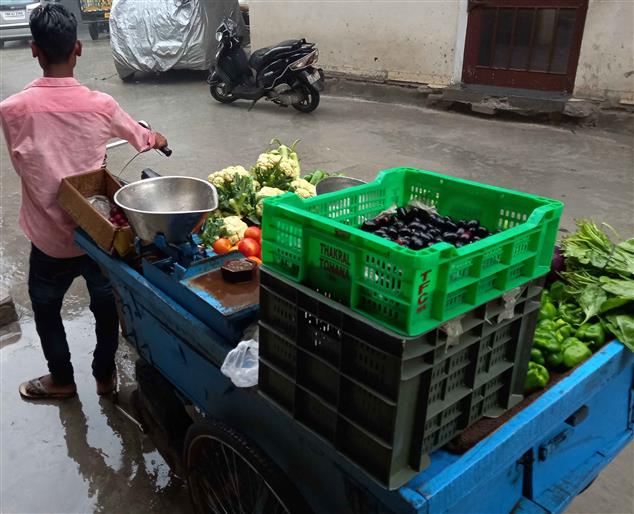 As the tenure of the Municipal House came to an end today, various projects initiated by the civic body in the past five years that are still incomplete are now at the disposal of the corporation Commissioner for action.

We are working to complete the road works and creation of green belts that have been lying pending. Other works such as those related to land branch will also be started as the new patwari has joined office. We will also identify designated spots for street vendors and shift them at the earliest.Rs Aaditya Uppal, MC commissioner

Among the incomplete projects is the implementation of street vendors rehabilitation policy, which has been resulting in loss of crores of rupees for the MC every year.

The street vendor menace, which regularly causes traffic congestion on roads, is a major concern for residents and commuters. While the MC has carried out several surveys of the population of these vendors, it has failed to shift them to designated spots in the past five years.

As per the initial survey conducted in 2017, the MC identified 3,163 vendors across the city. But it failed to shift these vendors to designated spots.

Later in 2020, the MC again conducted a survey of the vendor population and added 862 odd vendors to the list, taking the total to 4,025. Over the past two years, the civic body managed to shift just 400 vendors from near the residence of Mayor Sanjeev Sharma at Ragho Majra to a spot near the Lahori Gate, however, the other vendors have still been parking their carts on city roads.

City residents say the MC should have acted on the matter long ago. “The corporation’s failure to shift street vendors from the roadsides results in traffic congestion, losses to its exchequer and also becomes a cause of corruption,” a resident said.

An MC official said, “In 2020 the corporation had decided to divide the vendors into three categories — A, B and C — and collect vending charges ranging from Rs 800 to 2,400 from them as per their categories. If the MC manages to collect an average Rs 1,500 from each vendor, it can earn as much as Rs 60.37 lakh as vending fees every month (7.24 crore per year). The step will not only clear the city roads from the chaos but will also enrich the MC exchequer.”

Another official said the vendors repeatedly accuse corporation officials of corruption and collection of illegal weekly charges to allow them to park their carts along city roads. “Enforcement of vending policy will remove any such corruption as well,” he said.

Corporation Commissioner Aaditya Uppal said his office was working to complete a number of already initiated works. “We are working to complete the road works and creation of green belts that have been lying pending. Other works such as those related to land branch will also be started as the new patwari has joined the office,” he said.

Talking about the implementation of vending policy, he said the MC will start working on it at the earliest. “We will identify designated spots and shift the vendors at the earliest,” he said.