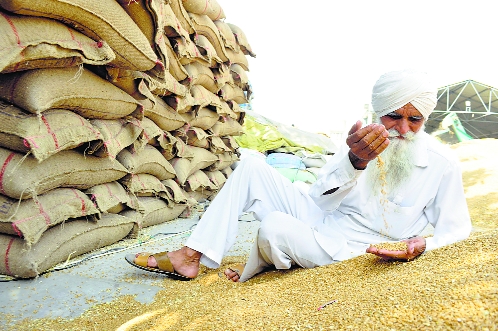 A farmer waits for the lifting of his wheat at the new grain market in Patiala on Sunday. Rajesh Sachar

Though many farmers here have applied for direct payment, they prefer involvement of arhtiyas (commission agents) in payments for the procurement of their grain at markets. Many of them do not know the nitty-gritty of the newly introduced payment system. They are also facing issues of slow lifting of grain and unavailability of gunny bags among others.

A small farmer from Tana village of Fatehgarh Sahib, which is situated nearby the new grain market here, said the new system of payment is beneficial to farmers. “Sanu bahuta nahi pata”, he quips, adding that the government’s decisions are all in favour of people. The farmer owns 5 acres.

But all farmers who reach the grain market do not have the same opinion.

Bhagwan Singh of Jhambo Kheri of Patiala was inconclusive. “There are benefits as well as disadvantages of the new system. Most farmers understand, but some might use the opportunity to avoid paying the commission agents their outstanding amounts from the previous procurements or loans. The latter might not get paid in time,” he said.

Meanwhile, Kewal Singh of Jassowal village has also applied for DBT (direct benefit transfer). He said: “We have applied for direct payment but feel the arhtiyas should be taken care of. They are known as private ATMs of farmers and the relationship built on trust that is there since years should continue.”

Amarjit Singh of Assomajra village is also uncertain about the new payment system though he has applied for it online. But he has more issues also to discuss. “We brought the crop here but the ‘bardana’ (gunny-bags) was not initially available. The administration needs to make prior arrangements.”

Harminder Singh of Lachkani village has also been waiting for ‘bardana’. “We brought some produce earlier also. But I have been awaiting gunny bags for days now,” he says. “The commission agent system was beneficial for the farmer and arhtiya both. We have applied under the new payment system but only time will tell how things turn out,” he added.