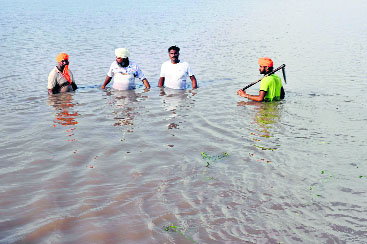 Farmers stand in a paddy field under rainwater at a village on the Rajpura road in Patiala on Friday. Tribune photo

Farmers and residents of various villages of the district today blocked the traffic on the Patiala-Rajpura road and held a protest over rainwater accumulation in their fields days after the region received heavy downpour. Over 2,000 acres of paddy crop is lying submerged in rainwater, which has accumulated in fields.

Farmers today gathered at the toll plaza said they were inconvenienced as water had collected in their fields. Earlier, water was receding, but high level of the Bahadurgarh-Ghanaur road had stopped its draining.

The protest continued from 11 am to 5 pm during which the Patiala Deputy Commissioner, tehsildar and DSP (Rural) reached the spot to take stock of the situation.

When contacted, the Patiala Sadar SHO, Karamjit Singh, said the road blockade was lifted after protesters were convinced by assurances of the administration to solve the issue. “Now, the administration and farmers have decided to install water pumping machines to pump out rainwater on road. The high level of road stops draining of water,” the SHO added.

“Protesters have been assured that rainwater will be drained from their fields. As such they have stopped protest,” the SHO said.