Had quit party after differences with Capt, his wife Preneet in 2014 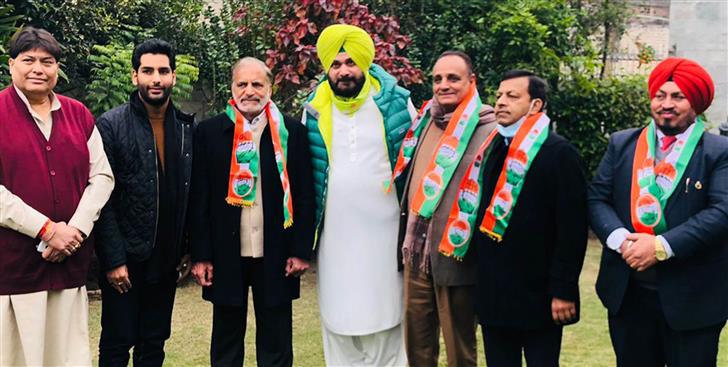 The poll battle for the prestigious Patiala urban seat, earlier contested on the Congress ticket by former Chief Minister Capt Amarinder Singh, has got an interesting twist after prominent Hindu leader from Patiala and former Mayor Vishnu Sharma rejoined the Congress in the presence of PPCC chief Navjot Singh Sidhu. Sharma had quit the Congress following differences with Capt Amarinder Singh and his wife Preneet Kaur in 2014.

The first Mayor of Patiala Municipal Corporation during the Congress government in the state from 2002-07, Sharma is a prominent Hindu leader of the city. Speculations are rife that he might be considered to be the Congress candidate from Patiala urban seat from where former CM Capt Amarinder Singh is expected to contest on the Punjab Lok Congress ticket.

“I am back in my family and will work to strengthen the party in the district. I met Navjot Singh Sidhu and have discussed the way forward”, said Sharma. On the possibility of contesting the polls from Patiala against Capt Amarinder Singh, Sharma said, “I will abide by the party’s decision on this. It is home coming for me”, he said.

Vishnu Sharma also remained the district Congress Committee (Urban) president and later was the first mayor of Patiala city from 2002-2007 and later left the Congress and joined the SAD in 2014. During the SAD regime, he was made the Chairman, Improvement Trust Patiala.

Senior Congress leaders from Patiala welcomed the decision to induct Vishnu Sharma claiming that he was a grassroots level leader, who knows the Patiala Urban constituency like the back of his hand. “Vishnu Sharma is one of the contenders for the party ticket from Patiala urban.