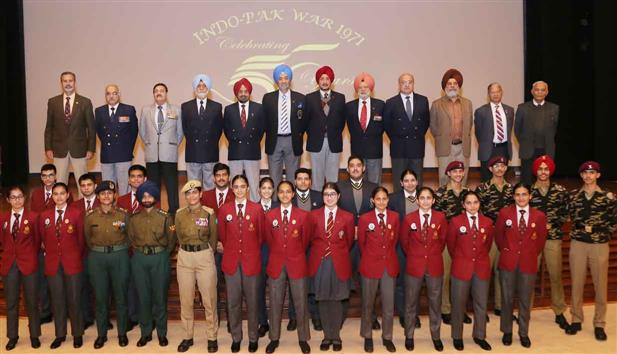 Participants at the golden jubilee celebrations of the 1971 Indo-Pak war victory at Yadavindra Public School in Patiala. Tribune photo

The event, which was anchored by Brig DS Grerwal (retd) and co-ordinated by Maj Gen Sanjiv Varma (retd), VSM, apprised students about the war tactics and Indian defence forces.

The event commenced with the opening remarks by Lt Gen Chetinder Singh (retd), PVSM, AVSM. Thereafter, a short movie was screened to present highlights of the war.

Students highlighted interesting aspects of defence forces like Battle of Basantar, Battle of Gangasagar (by Col AK Singh, CO 14 Guards), Race for Dhaka, air and naval aspects on the occasion. The proceedings were summed up by Maj Gen BS Grewal (retd).

The auditorium reverberated with the saga of brave men and their sacrifices. Students also visited the firing range at Dhablan village in Patiala, where they were given demonstration about some tactical manoeuvres by the 1 Armoured Division.

“We felt the chill in our spine while knowing about hardships of the war. We respect and are inspired by our tough men, who are guarding country’s borders,” said one of the students.