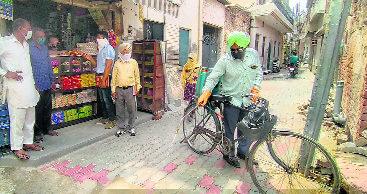 A team of the Health Department sprays insecticide in a street during an anti-dengue awareness drive in Patiala. Tribune photo: Rajesh Sachar

In the wake of alleged under-reporting of dengue cases, the Health Department has issued directions to private labs and hospitals to get confirmatory tests done at government labs.

Health officials claimed that private labs and hospitals were conducting rapid card test for dengue, which was not a confirmatory test to ascertain if a person was suffering from the disease.

It has been learnt that private labs had already declared many patients positive for dengue. However, the Health Department didn’t confirm their reports.

The district epidemiologist, Dr Sumeet Singh, said, “Every private hospital and clinic is required to intimate the Health Department about any suspected and confirmed dengue case and send the affected patients sample to government lab for confirmatory tests.”

The Health Department had once again issued directions to private labs and hospitals in this regard, he added. So far, no dengue case had been confirmed in the district, he said.

Meanwhile, the Patiala Civil Surgeon, Dr Satinder Singh, said, “Card test, which is conducted by private labs, is not confirmatory. People should go for ELISA test conducted at government hospitals free of cost.”