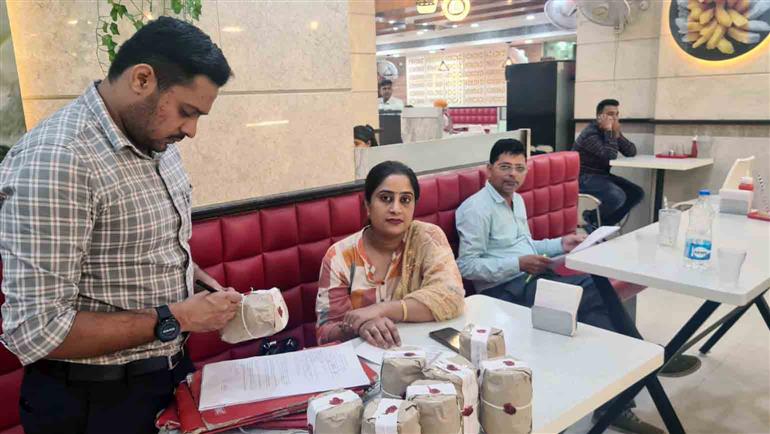 Officials of the District Health Department collect food samples from a sweets shop in Patiala on Wednesday. Photo: Rajesh Sachar

In the wake of the ongoing festive season, the food wing of the District Health Department, on Wednesday, collected food samples from various sweets shops and a bakery in the city.

Led by the District health Officer (DHO), the health team inspected sweets shops and collected seven food samples. The team, along with the Food Safety Officer (FSO), issued a challan to a sweets shop for failing to maintain hygiene standards.

They collected two samples of khoya barfi; a sample of kalakand and milk cake; two of biscuits and one sample of boondi laddo.

The health officials said they issued a challan to a sweets shop near Mata Kaushalya Hospital after it was found hygiene standards were not maintained. “Collected food samples have been sent to the State Food laboratory for testing. Further action will be taken following the lab reports of the samples,” said DHO Dr Daljeet Singh.

As per the rules, each FSO was supposed to collect 15 samples in a month, and with four FSOs posted in the district, the Health Department was required to collect 60 samples, they said.

When asked about the fewer number of samples in September, the DHO said they would be conducting more raids in the remaining days of the month.